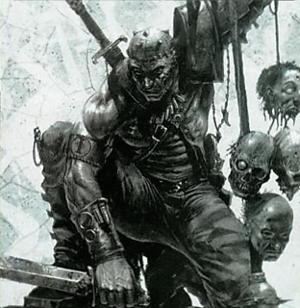 Gland Warriors are a specialized, genetically modified force of Imperial Guardsmen originally designed to battle the Tyranids. Despite being Human originally, due to the nature of their modifications they are now generally classified as Abhumans by the Imperium at large.[1]

After the Forge World of Dantris III became heavily infested and polluted by Tyranid forces, the Techpriests of the planet modified several companies of the Lostock 23rd to fight in the hellish conditions. They had many organs and drug-secreting glands implanted in their bodies so that they could survive unprotected. Their combat abilities and aggressiveness were increased. Thanks to the heavy losses they took to ensure the successful defence of Dantis III, only a handful of Gland Warriors are believed to have survived, which were taken by the Inquisition for study and "debriefing". These survivors became known as the "Gland War Veterans" and were later taken on as members of Inquisitorial retinues.[1][2]

The processes by which the companies of the Lostock 23rd became Gland Warriors are understood by only a few Techpriests, and rarely utilized, for the inquisition invariably take an interest in the use of such technologies. Nonetheless, a number of regiments have been subjected to the process, and can be found throughout the galaxy.[2]

The glands implanted into these warriors contain the Combat Drugs known as 'Slaught, Frenzon and Spur, which enhance their capabilities in combat, though often at a price. Indeed, Gland Warriors, like any other group who utilize such potent drugs - such as Penal Legions — can die at any time. This most often happens during combat, as their systems are quickly overcome with the drugs dispensed by their artificial glands.[1][2]

They are typically equipped almost exclusively for close combat, with a laspistol, a combat knife and a form of halberd known as a "Dueling Glaive".[1][2]