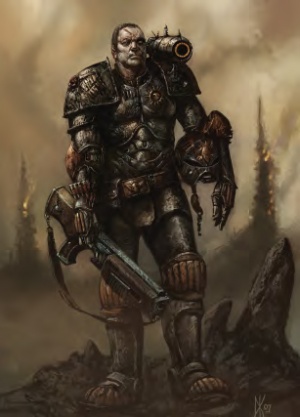 Fischig's great strength was his self-knowledge. He understood his own limitations. His strengths were loyalty, physical power, fine combat skills, observation and a nose for detail. He was not quick witted, and his abhorrence of book-learning meant that even the rank of interrogator was beyond him. Though he would have loved to rise formally through the ranks of the Inquisition, he had never tried, contenting himself with becoming one of the fundamental components of my staff. To try, he knew, would have meant failure. And Godwyn Fischig hated to fail.
Gregor Eisenhorn[2a]

Godwin Fischig was an Adeptus Arbites chastener from Hubris and long-time associate of Inquisitor Gregor Eisenhorn.

Godwin Fischig was born on Hubris, a planet in the Helican subsector. The first recordings of him indicate that he was a chastener in the local Arbites and was evidently a highly placed and trusted individual, as shown when he was assigned by High Custodian Nissemay Carpel to act as his eyes and ears during the investigation into the incident at Processional 2-12 led by Inquisitor Eisenhorn. This investigation led him off-world to Gudrun, a nearby planet on which the initial schemes of Pontius Glaw were thwarted. Fischig played a key part in this, and went on to relinquish his role in the arbites to become a permanent member of Eisenhorn's retinue.[1]

Fischig participated in almost all of Eisenhorn's major undertakings, including the Quixos related incidents and the final battles to defeat Pontius Glaw, known by then as Khanjar the Sharp. A man of strong beliefs, Fischig trusted Eisenhorn implicitly and totally, even going so far as to spring him from prison on Cadia as he felt that the Ordo Malleus was mistaken in its branding Eisenhorn a heretic. This was also the first recorded incident where Fischig explained that this trust was not all forgiving, and that he would have no hesitation to take appropriate action if he felt Eisenhorn had 'crossed the line'.[2]

It was during these final battles with Pontius Glaw that Fischig found his Puritan beliefs severely tested by the more Radical approach being taken up by Eisenhorn, to the extent that he found he could no longer work with him. Fischig felt he had gone too far in his radical approach and was in danger of heresy, a feeling which Eisenhorn fundamentally opposed. The pair split up for a short time before Fischig, believing he was trying to save his old friend's immortal soul, contacted the Inquisition and revealed the location and intentions of Eisenhorn, information he got from Medea Betancore. This led to a trap being sprung by Inquisitors Heldane and Osma, who by this time had attained the rank of Grand Master, which had the aim of both capturing Eisenhorn and forcing him to reveal the location and secrets of both the Malus Codicium and the daemonhost Cherubael. This trap failed and Fischig found himself pointing a gun at Eisenhorn. Still believing he was doing the right thing, Fischig shot out both of Eisenhorn's knees and would have executed him, but instead was himself killed by Medea Betancore. His body was then used to imprison Cherubael.[3]

Tall and fair haired, Godwyn Fischig was a typical member of the Adeptus Arbites in that he was physically imposing and possessed of a sharp mind. Blessed with exceptional combat skills, Eisenhorn even remarked that the Arbites had "robbed the military of a fine soldier".[Needs Citation]

Fischig also had great skills as an independent investigator, and was often used to prepare the way for Eisenhorn's major work.[Needs Citation]