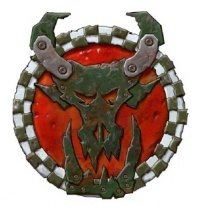 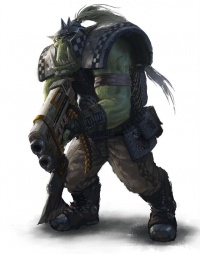 The Goffs are an Ork Clan and are amongst the toughest and most brutal orks.

A Goff likes nothing more than hearing the hammering of guns and that satisfying wet crunch when his choppa finds its way deep into the throat or chest of an enemy. They will seize upon any excuse to start a brawl, even amongst themselves and often all it takes is a misinterpreted glance in their general direction or grunted insult to start the fists flying, the Boyz quickly forgetting the reason for the bust-up and simply enjoying the resulting fight. This preference for near-constant scrapping amongst themselves also serves a practical purpose between battles, keeping them honed as specialists in hand-to-hand combat, as they prefer to wage their wars up close and personal.[2]

Goff-dominated warbands are notorious for the sheer number of Ork infantry they muster in times of war. All it takes is the hint of a good fight and the Goffs appear in droves, flocking to any Warboss who can promise them the chance of opening some skulls. Because of their preference for close combat, Goffs prefer to fight on foot, usually only hitching a lift on passing Trukks so they can jump off nearer to the enemy and get stuck into them as soon as possible.[2]

Goff mobs are usually dozens strong, and a true Goff horde has multitudes of Boyz at its heart, so that when the Goffs go to war, the ground shakes to a stampeding thunder of steel-capped boots. Enemies often interpret these horde tactics as a means to overwhelm set defences and soak up casualties during an assault. More likely though each individual Goff is just following the rest of their mob, rightly reasoning that if an Ork is charging across the battlefield there will be something to attack at the other end.[2]

The Goffs use a bull’s head as their clan emblem, as they feel a kinship with bad-tempered, violent and flatulent beasts. Horned helms are also seen as a symbol of the clan’s aggression, and can even make handy weapons, making a head butt or head-first charge even more vicious. They dress predominantly in black, on the basis that dressing up in flashy colours ‘is fer wimps and Madboyz’. Though they sometimes decorate their wargear with checks and dags, Goffs are disgusted by the concept of camouflage. Not only do the Goffs consider the idea of deliberately hiding from a fight cowardly, but they also cannot comprehend why an Ork might not want to ‘have a go’.[2]

They view all the other clans as inferior, with most Goffs seeing it as their Gork-given right to lord it over the other Boyz. For this reason a lot of Warbosses and Nobz tend to be Goffs, their love of bashing heads making them natural Ork leaders, with a talent for keeping unruly mobs of Boyz in line. Goffs also have a fearsome reputation in the fighting pits. The saying ‘a Goff is always worth his teef’ comes from how hard they are to beat, it being a well known fact among the tribes that betting teef on a Goff is always a cunning plan. Goffs however consider making teef off fights only a by-product of the fights themselves. As any self-respecting Goff will tell his Boyz, fightin’ for teef is one thing, but a proper Goff should always be willing to break faces for free.[2]