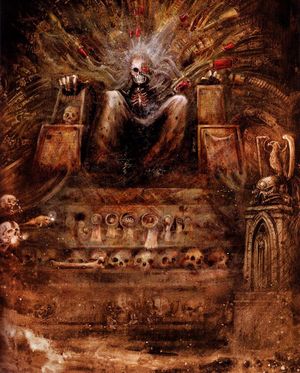 The Golden Throne is an ancient and arcane device located in the Imperial Palace on Terra. It currently houses and sustains the remains of the Emperor of Mankind.[2a]

The Golden Throne was thought to be an ancient relic dating back to the Dark Age of Technology which the Emperor discovered in sunken ruins within Asia's deserts,[5] although even the Emperor Himself was unsure whether the idea was His, or to what extent the devices he discovered had served as inspiration.[7] Another similar device likely used to test the technologies by whoever made it, known as Dark Glass, was also discovered by the Emperor during the Great Crusade and he set about restoring it as well.[6]

The Emperor then went to work to restore the device for his own ends, providing Human access to the Eldar Webway. Once installed under the Imperial Palace the Golden Throne took the form of a bulky machine-like chair suspended over gigantic mechanised doors made of gold metal. The doors were said to be large enough for a Warhound Scout Titan to walk through unbowed. The chair was linked to the portal by huge bundles of cables, wires and conduits. The whole machine was made of the same golden metal. The throne was built at one end of a vast hall big enough to house up to six fully equipped Space Marine Companies. This was the Emperor's main laboratory, which was itself at the centre of his underground complex, known as the Imperial Dungeon. Even after the Throne's construction, the lab remained littered with other huge machines and storage crates. Hundreds of red-robed technicians and labourers worked in the lab.[1a] According to Pieter Achelieux, the Golden Throne would have required an extremely powerful Psyker to operate and implied that one of the Primarch's may have been designed for this role. The Emperor's disappointment with Magnus the Red's betrayal suggests that he was intended to sit upon the throne.[5]

The Emperor built the throne as a means of entering the Webway. Having this fixed point of entry was meant to free humanity from its reliance on Warp-ships and astrotelepathy, since humans could simply enter the Webway and emerge wherever they chose in the galaxy. He sent armies of workers through the portal and had them construct a new short section of Webway linking to the rest of the abandoned Eldar network. Since the original Webway was built of a psychically resistant material which the humans could not replicate, the Emperor used his powers, via the Golden Throne, to protect the human-built section from the Warp. Because of the sensitive nature of the project and due to fears of how the Navis Nobilite would react to their monopoly on interstellar travel being rendered obsolete, the Emperor kept the Throne a secret from even his sons.[5]

The Golden Throne is connected to a massive Warp beacon known as the Astronomican which generates a system of signals making faster-than-light travel in the Imperium possible.[1a]

At the outset of the Horus Heresy, when Magnus the Red used his sorcerous powers to warn the Emperor of Horus's treachery, he inadvertently created huge holes in the Emperor's psychic shield. Daemons poured into the human-built portion of the Webway and slaughtered thousands of Adeptus Mechanicus workers there. The Custodian Guard and Sisters of Silence were left fighting a desperate battle to prevent the daemons from reaching the portal and breaching Terra itself. Eventually the Imperial forces had to abandon the Webway and retreat back into the Imperial Palace. The portal was closed but only the psychic power of the Emperor was enough to keep it that way so he was forced to remain on the Golden Throne or find a suitable replacement. Later Vulkan arrived in the throneroom, where at the Emperor's guidance he installed the Talisman of Seven Hammers. This device acts as a Dead man's switch which would destroy not only the Imperial Palace but also all of Terra should the Golden Throne fail. This would deny the forces of Chaos from ever taking the throneworld.[8]

When the Emperor was forced to battle Horus on board the Sons of Horus flagship, the Vengeful Spirit, his place on the throne was taken briefly by Malcador the Sigillite. Malcador perished performing this endeavor, and the mortally wounded Emperor was reinstated upon the Throne after his battle with Horus. At his instruction, it was then enhanced and converted into the life-sustaining form it currently bears.[1a] The Emperor's physical form is kept alive on the Golden Throne through advanced stasis fields and psi-fusion reactors that has become beyond the understanding of the Imperium.[2a]

By late M36, the Golden Throne began to require more and more sacrifice of Psykers to remain functional. By early M41, four times the amount of Psykers were required to maintain optimal power levels of the Throne.[3] In the last year of M41, Techpriests discovered failures in the mechanisms of the Golden Throne that are far beyond their ability to repair. [2b]

Faced with this cataclysmic scenario, several high-ranking members of the Imperium decided to act. Shortly before the formation of the Great Rift the scheme manifested when the Lord Inquisitor Adamara Rassilo attempted to smuggle a Dark Eldar Haemonculus onto Terra in cooperation with three members of the High Lords of Terra: Fabricator-General Oud Oudia Raskian[10], Speaker for the Chartist Captains Kania Dhanda[10], and Master of the Astronomican Leops Franck.[10a] However the Haemonculus betrayed the conspirators, disappearing beneath the Imperial Palace and conducting grotesque killings and experimentations. Ultimately the Haemonculus was cornered and slain by Lord Inquisitor Erasmus Crowl and Custodes under Navradaran and Rassilo's cabal was shattered with it.[11] Despite this setback Leops Franck was able to send out a delegation of Tech-Priests and Xanthite Inquisitors for the final phase of the Project.[10a] Launching an expedition into the Webway, the Tech-Priest and Inquisition forces battled through Harlequins and Daemons alike before reaching Commorragh. There, a dark bargain was struck.[4]