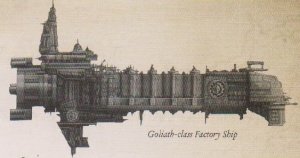 The Goliath Class Factory Ships are enormous, space-faring, energy-processing vessels used by the fleets of the Adeptus Mechanicus. They devour the solar plasma of stars to power their own fuel and goods production techniques, in order to sate the endless hunger of the Imperium's Hive Worlds. They are fragile ships treated with much respect, and the ships slowly plod their way through certain traditional trade routes. They are necessary for the survival of Hive Worlds, delivering vital goods and fuel to them on a regular basis.[1]

If a Goliath factory ship takes any sort of damage, it risks detonating in a catastrophic explosion that is capable of scouring the atmosphere from an entire world.[1]

In the most dire of emergencies when pursued by enemy warships a captain may jettison the valuable fuel which forms a dense cloud a plasma that explodes with several megatonnes of force when ignited by the Goliath's engines.[2]