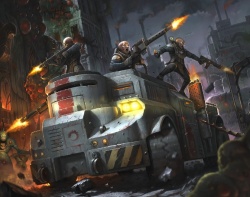 The Goliath is a type of Imperial construction and mining vehicle. These rugged machines are frequently used by Genestealer Cults when they march to war.[1]

Built to the blueprints of a ubiquitous STC, Goliath Trucks are rugged transports originally designed to bear Imperial factotums through crypt complexes and mining tunnels. The vehicle’s dense and robust construction makes it proof against the most hostile of underground environments, and its folded layers of chemically treated permasteel give it a measure of protection against every industrial hazard the Imperium has yet encountered. Even an unmodified Goliath truck can survive acid storms, hurricanes, malfunctioning rad-chambers, and volatile toxin eruptions. Whilst the Genestealer cult lies quiet, its Goliaths are used in everything from subterranean transit to stockpiling munitions. The duraglass screens inside each vision slit can be raised to make the vehicles airtight – as useful for surviving the choking confines of a hazard mine as the poisonous atmosphere of battle. For defense, they are frequently outfitted with Heavy Stubbers and twin Autocannon arrays. Their reputation is long held; even the Imperial Guard has respect for the mighty Goliath.[1]

None gives a second glance to a column of Goliath trucks bearing ragged miners through the streets, and the iconography which adorns them is dismissed as workplace graffiti. Then, when the mind-stimulus of the Magus or Patriarch signals the time is right, the broods within these vehicles throw open their hatches and burst out, some still mistaken for human even at this point.[1]

The most common variant of the Goliath Truck is known as the Goliath Rockgrinder. Though compact, the Goliath Rockgrinder is built to withstand rockfalls, dam bursts and the fiery backwash of its clearance incinerator, Heavy Seismic Cannon, or Heavy Mining Laser. Those huddled within have a great deal of protection from all but the highest-calibre weapons. The massive drilldozer blade at the Rockgrinder’s front boasts grinder arrays that can crack mineral seams and bore tunnels through bedrock. These are put to a far more sinister use in times of war, when it is used to cut through swathes of enemy infantry and serve as a battering ram. Against a disciplined enemy, the instigators of the attack might soon find themselves surrounded and put down, and though the Rockgrinder has a thick hull, it cannot withstand concentrated heavy weapons fire for long. Still, these vehicles are well suited to shock-assault tactics.[1]