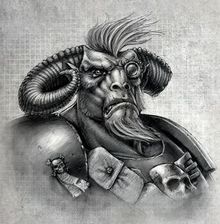 Gor Half-Horn is a Necromunda Beastman bounty hunter who offers his service in Hive Primus. No one knows where the mysterious Gor came from or how a Mutant was able to attain a bounty hunter license.[1]

Gor is a figure of dread in the underhive, but equally, they make him a target for every raving zealot he encounters. As a sanctioned bounty hunter, Gor is entitled, in theory at least, to go wherever he will in pursuit of his targets; in reality, he has often found himself the quarry, though so far none have bested him. Because it is so rare for a Beastman to be sanctioned as a bounty hunter, Gor has become the subject of numerous legends throughout the underhive. Some say he was once a member of an Abhuman Auxilia attached to an Astra Militarum regiment, and the sole survivor of a battle of apocalyptic proportions. Others whisper that he was once in the employ of an Inquisitor, whose service he fled for a life among the damned. Some have even claimed that he was not born an Abhuman at all, but a noble scion who developed hideous mutations in his adolescence and fled downhive lest he be put to death by his own kin.[2] 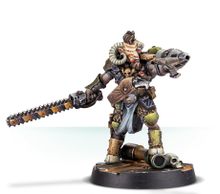