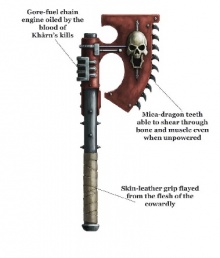 Gorechild is a huge chainaxe and is an artifact from the Great Crusade. Its teeth come from the jaws of Mica-dragons of the death world Luther McIntyre IX, its haft forged from adamantium and its head is a full three spans across.[1]

Gorechild and its twin, Gorefather, were once the personal weapons of the World Eaters' primarch, Angron.[2]

During the Battle of Armatura, Angron became entombed by a fallen building and was forced to use Gorefather and Gorechild to climb out, and the damage ruined their teeth-tracks.[3a] Khârn would recover Gorechild, despite the World Eaters views on "inherited weapons" and had it repaired as his personal weapon.[3b] It has continued to serve him in the ten thousand years since.[1]