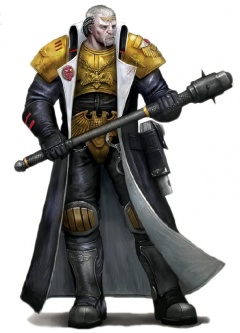 Luthir Veremonn Goreman is a Lord Marshal of the Adeptus Arbites, ruling from the Precinct-Fortress on Scintilla in the Calixis Sector.[1]

Born on the world of Sinophia to a noble family that specialized in organ trading, and as a result the young Goreman learned the art of violence at a young age to secure donors. This changed when he attempted to abduct a former Enforcer now serving as a Confessor, which quickly resulted in him being converted to the Imperial Cult. Now a changed man, Goreman helped the Adeptus Terra round up the militia and supporters of Sinophia's corrupt Governor after he was found attempting to steal from the Administratum's Tithe. Shortly after, he joined the Adeptus Arbites as an Arbitrator recruit.[1]

After putting down a riot on Barsapine, poachers on Spectoris, and a workers revolt on Scintilla, Goreman rose to command the Scintillan Precinct. He took his seat at a trouble time and feuding and instability plagued his forces. As a result, Goreman oversaw a vicious purge to end the civil fighting within his precinct. Only the intervention of the moderate Judge Jhemek-Naad stayed his hand. After gridlock again plagued the Precinct, Goreman was promoted to Lord Marshal.[1]

As commander of Arbites forces in the Calixis Sector, Goreman has overseen the creation of a special task force known as the Divisio Immoralis which hunts down insurgents and cults wherever they may be found.[1]