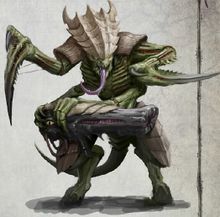 A Warrior of Hive Fleet Gorgon

Gorgon was relatively small compared to other Hive Fleets, but it was exceptional for its ability to quickly adapt on a biological level to new circumstances of battle. In fact, Gorgon manifested more bioform varieties than any other Hive Fleet. This rapid pace of adaptation may have been unique to Gorgon, or it may have been a response to conflict with the Tau, a race who are also highly flexible and adaptable but on a technological level.[4]

Gorgon relies upon this lethal malleability to break down the defences of targeted worlds. Its invasion swarms contain particularly large numbers of sporecaster organisms, which pour clouds of toxins into the atmosphere ahead of the opening assault.[4]

Every organism of Gorgon contains a gland which produces a toxic semi-sentient spore. As battle progresses and more of the Hive Fleet taste the flesh of its foes, so these spores tailor themselves to the biological make-up of their prey. A new effective adaptation is transmitted through the synaptic network, and soon enough the weapon-spores of Gorgon become especially poisonous to their latest opponents. The nearest scratch or skin contact often becomes utterly lethal. Such is the prowess of this biological warfare that even the Tau have found themselves outpaced and overcome.[5]

Gorgon, after it devoured the worlds inhabited by several Tau trading partners, launched its first attack on the Tau Empire by destroying an orbital perimeter outpost of the Sha'draig colony in 980899.M41, then continued on to the shipyards of Sha'draig's moon. Initially the shipyard's interceptor guns held Gorgon back, but soon an adapted strain of Gargoyle with a refractive mucous coating that lessens the damage from interceptor fire overwhelmed the shipyards and slaughtered its remaining defenders. A fleet from the Ke'lshan Sept, commanded by Kor'o Valroth, was sent to investigate the outpost's silence. Gorgon continued on to the Sha'draig planet itself and by the time the Ke'lshan fleet arrived in 420990.M41 it was already under siege. The fleet broke through the Tyranid blockade surrounding the planet long enough to deliver reinforcements to the surface.[1]

On Sha'draig, Hormagaunts assaulted the Tau outer defence lines in the nearby forests, which Shas'el Vorcah had filled with Kroot auxiliaries directed by Shaper Pechallai. However many of the Hormagaunts ended up entangled in the forest's undergrowth where the Kroot could easily dispatch of them. Next, better-adapted, swifter Hormagaunts, less prone to being entangled, attacked again and slew thousands before they were also eventually stopped. A final wave, consisting of Hormagaunts honed to pierce and tear Kroothide, proved efficient enough and swamped over Pechallai's defences. The Hormagaunt's adaptions however had weakened their own resistance to injury and so when they emerged from the forests, the Tau defenders quickly gunned them down.[1]

Gorgon's cycle of adaptation began again, and soon Hormagaunts and Termagants were deployed with close to total immunity to Pulse rifle fire. These creatures overran the main settlement of Sha'draig, forcing Shas'el Vorcah to withdraw his forces to the mountains. The Tau, in response to the creature's resistance to their current weaponry, sent Stealth Teams to recover the Kroot rifles from Pechallai's fallen defences and distribute them amongst Vorcah's surviving Fire Warriors. The enemies' responses to each other continued, with the Tau racing to develop new technology and weapons and the Tyranids breeding new biological creatures with ever more suitable adaptions. At one point Gorgon spawned Hormagaunts and Gargoyles with chameleonic hides to blend in with their surroundings, making them all but hidden to the Tau except for their Battlesuit sensors.[1]

In 843901.M41, Supreme Admiral Kor'O'Vanan deemed the situation on Sha'draig irretrievable and ordered a withdrawal. His fleet broke through the blockade and attempted to evacuate all the surviving ground forces, but Shas'el Vorcah remained behind under the guise of covering the retreat. However his true intention was to continue the fight with a series of suicide missions to break the Tyranid Synapse web, for the Tau had learnt that Gorgon's rapid adaptation was forcing it to rely on smaller, less complex organisms able to be quickly bred and so it had relatively few larger creatures. Vorcah's tactic was successful and eventually drove Gorgon from Sha'draig, but not before it had been almost completely consumed by Ripper swarms.[1]

In 075902.M41 dozens of Bio-ships detached from the main Hive Fleet and invaded the Tau colony of Ka'mais. This triggered the emergence of an unexpected Necron fleet from Ka'kais' dead moon which then set about destroying the outnumbered Tyranid ships. On Ka'mais a day of celebration was declared and as the Necrons landed they were greeted with great ceremony by Ethereal Aun'taniel. Despite the welcome, Aun'taniel was quickly slain by the Necrons and Ka'mais was then harvested.[1]

The Ke'lshan Ethereal council ordered the evacuation of the colony worlds between Ka'mais and Ke'lshan. The evacuation fleet from one of these worlds, Ho'sarn, was ambushed by Gorgon and slaughtered.[1]

As Gorgon left the Ka'mais system in 550902.M41, it was attacked by Kor'O'Vanan's fleet at the Battle of Sol'ai Rift. At first, things favoured the Tau, until a cluster of Ramsmiter and Razorfiend bio-ships appeared with nigh-immunity to the Tau's Ion Cannons and the Tau fleet had to withdraw. The Tau however managed to take out many of Gorgon's Narvhals, bio-ships which the Tyranids use to travel faster than light, hoping to buy time for Ke'lshan to further fortify against the coming Hive Fleet.[1]

Gorgon, on its way to Ke'lshan, consumed the Roksh system, home of the Rokshashi Wealthweb merchant guilds. Several Tau trading fleets in the system and a secret Tau listening post on Roksh XVI were also devoured.[1]

At Ke'lshan an Imperial fleet emerged from the Warp in 760902.M41 and immediately besieged the planet[1] Ke'lshan Prime[3], unaware that their warp journey had taken one hundred and fifty years and the Damocles Crusade they were dispatched to fight in had already come to an end. Castellan Crask's Cadian XVIIIth were deployed to begin the invasion. Volroth's fleet, heavily retrofitted at the Ke'lshan shipyards to beat Gorgon's immunities, was diverted to engage the Imperial fleet. In 785902.M41 Gorgon descended upon Ke'lshan and joined the already underway battle. Now faced with a common enemy, Crask and Valroth agreed to a truce and together their fleets turned on Gorgon, destroying close to all of its bio-ships. The Tyranids were unable to adapt quickly enough to the disparate nature of the Tau and Imperial Guard forces combined, and at the Battle of Worldspine Ridge in 500903.M41 the last Dominatrix and Hive Tyrant were slain and Hive Fleet Gorgon came to an end. The truce between the Imperium and the Tau also ended shortly after.[1]

Hive Fleet Gorgon has recently begun to move onto Imperial Agri-Worlds, and according to the Inqusition tainted foodstuffs may already have been circulated far and wide across the domain of Mankind.[5]