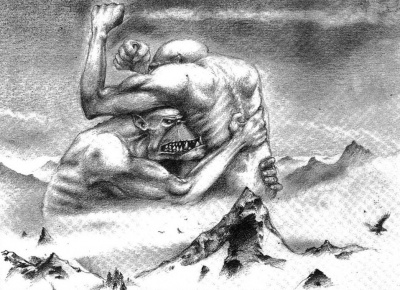 Gork and Mork are the twin gods of the Orks which are said to dwell in a region known as the Great Green.[6]

Ork traits and emotions have a reflection in the warp the same as the traits and emotions of Humans and Eldar do. These Ork traits manifest in the form of the strong, belligerent, and indestructible Ork gods Gork and Mork. The difference between the two gods is very subtle: one of them is brutally cunning and the other is cunningly brutal. The Orks often disagree which is which, and they sometimes fight wars over this matter.

Both gods are believed to offer help to individual Orks in battle, but in the grand scheme, it doesn't matter which god is worshiped. Generally, Gork is worshiped by the regular boyz as a more direct manisfestation of brutal power, when Mork is the God of Oddboyz, the cunning Orks like Meks and Weirdboys.

The titanic Ork Gargants are constructed in the two gods' image; consequently, they are living idols and war machines. The Mekboys who build them work from a vision held within their imagination, usually inspired during times of Waaagh.

Ghazghkull Mag Uruk Thraka is the prophet of Gork and Mork, the two gods supposedly guiding his wars of conquest against the Imperium, revealing the best ways of defeating his enemies. This was apparent in the invasions of Armageddon and the subsequent Great Waaagh!.

When battling against The Beast during the War of the Beast, Vulkan forced the Beast and himsef into the raw energy of the Waaagh used to power the mighty Cathedral Gargant. While exposed to the raw power, Vulkan witnessed the origins of the orks and was able to watch Gork and Mork battle each other at the beginning of time. This allowed Vulkan to realize the nature of the orks and their relationship to Chaos and how they were an emergent race that evolves through trial and error.[5]