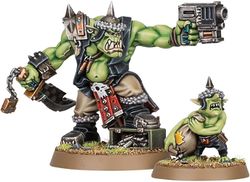 Gorzag Gitstompa is an Ork Nob[2] who is aided in battle by the Ammo Grot Nikkit, who carries spare ammo for Gitstompa.[1]

He oddly claims to be at least 7,000 years old and while not impossible, Gorzag's mutterings of Da Revolushon, Metal Mountains and Da Big Race lead most to believe he is simply mad. Either way, it has made the Nob very angry and in desperate need for something to krump[2]. Gorzag and Nikkit have recently become wanted dead by an Ork horde, after the Nob looted a Boss' stash and those who kill him will be rewarded with lots of Ork Teeth.[3]

Gorzag Gitstompa and Nikkit were available to buy from the 26th of December 2020 until the 3rd of January 2021. Gitstompa's model has a lot in common with a Games Day exclusive Ork model, that was released several years ago. Both though, were based on a piece of artwork from the Gorkamorka game.[1]