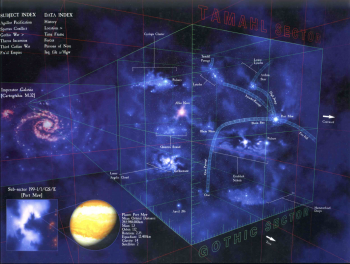 Map of the Gothic Sector showing Port Maw.
The Gothic Sector is a sector of the Imperium located within the Segmentum Obscurus close to the border of the Ultima Segmentum.[2] The sector was the arena of Abaddon's 12th Black Crusade otherwise called the Gothic War.

The Gothic War was Abaddon's 12th Black Crusade which saw the ravaging of the Gothic Sector and the capture of two Blackstone Fortresses.

In the lead up to the Gothic War during 142.M41, a cataclysmic shockwave passed through the warp and the entire sector was engulfed in a warp storm cutting it off from outside help. Battlefleet Gothic, the Imperial Navy Battlefleet of the Gothic Sector, fought against many Chaos fleets led by individual Warmasters - estimates vary from eight to twenty or more Chaos fleets present, each capable of rivaling an Imperial battlegroup - as well as pirates of the Eldar and the unconfirmed presence of a Craftworld, Ork pirates, and also human pirates. The death toll on both Imperial and Chaos sides ran into the millions; planets were invaded and recaptured and bases attacked all the while the sector was isolated from outside Imperial help.[1c]

In 151.M41, almost ten years later, did the warp storms finally begin to abate allowing reinforcements to arrive. With an alliance between the Imperium and the Eldar, Abaddon's fleet was located and pursued to the Schindlegeist system where the deciding battle of the war took place, seeing Abaddon beaten. It wasn't until 160.M41, almost twenty years after the start of the war, that the sector recovered its planets and trade routes from the threat of remaining Chaos fleets, pirates and Orks.[1c]

Following the resurrection of Roboute Guilliman and the formation of the Great Rift at the end of the 41st Millennium, Dimmamar was one of the worlds which became stranded in the Dark Imperium.[3]

The Gothic Sector was the location of the Blackstone Fortresses, ancient abandoned space stations created as weapons against the C'tan which were found and refitted into Imperial naval bases. In the Gothic War Abaddon captured three out of the six still existing. He went on to use them to wipe the atmosphere off an entire planet, and even push a star to super nova and annihilate an entire star system.[1c]

At the ending of the Gothic War, Abaddon managed to remove two of the fortresses into the warp. The third Blackstone Fortress Abaddon had control over was boarded by Imperial forces where they met no resistance nor found any crew. Roughly an hour after the Imperium recaptured the fortress it self-destructed mysteriously along with the four other fortresses under Imperial command.[1c] Abaddon later resurfaced with the two lasting Blackstone Fortresses in his 13th Black Crusade.

Below is a list of the known subsectors and systems/planets of the Gothic Sector. The systems may contain more than one world but the political power and the bulk of resources will be concentrated on the type of world listed below.[1b]

The Gothic Sector and the Gothic War are the focus of Games Workshop's Battlefleet Gothic game released in 1999.