Graia was an Imperial Forge World and home to the Legio Astraman.[1a] 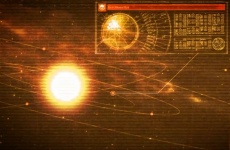 Graia is the most prosperous Forge World of the Belt of Iron and much of its production is geared towards Titan engines.[12]

Though the Adeptus Mechanicus does not make it widely known, the principle Forge networks of Graia, known as the Graian Crown, is capable of independent flight. Giant fusion engines allow it to escape its host planet's gravity and move to the nearest Mandeville Point, where it can then travel through the Warp. The last time Graia attempted this, it was assaulted by an invasion fleet of Necron aircraft that soared up from the Laochan Gate. Though Imperial records currently claim that Graia's priesthood have returned to circumnavigate their original home world, at least one recent Rogue Trader report lists the planet's orbit as strangely empty.[9]

The world peacefully assimilated into the Imperium during the Great Crusade after a treaty was signed, granting the powerful world a local empire in exchange for allegiance.[12]

Graia remained loyal to the Emperor in the Horus Heresy. Its forces took part in the Cataclysm of Iron, where it endured a vicious siege by Dark Mechanicus forces.[10]

Graia is known to have its own patterns of Hellhound and Rapier Laser Destroyer. It also produced an experimental version of Space Marine Grenade launcher known as Vengeance launcher and created its own Manticore pattern.

Note, that while the missiles on Graia pattern Manticore are the most noticeable difference from more common Stygies VIII pattern, these are incendiary missiles and are not related to Graia pattern, which differs from Stygies VIII version by tower details.