Like so many of its brethren, Graia was once a forge world cast in Mars’ image. However, since the Adeptus Mechanicus breached the strange portal atop Mount Laochan – and in doing so triggered a devastating invasion from migrating Donorian Fiends – the forge world has been subject to emergency relocation.[4]

During the Horus Heresy Graia remained loyal to the Emperor. Its forces battled the Dark Mechanicus in the Cataclysm of Iron.[5]

Imperial Navy cargo vessels being shot down by the Orks' artillery.[1]

Captain Titus and brother Leandros approach the Guardsmen of the 203rd Cadian Regiment.[1] 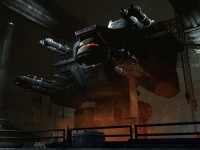 Mira and the Ultramarines survey the Orks' anti-aircraft artillery.[1]

The Ultramarines in the midst of the Ork horde.[1]

Bloodletters emerge from the warp rift to attack the Orks.[1]

Captain Titus is confronted by Inquisitor Thrax and his escort from the Black Templars.[1]

Titus takes his leave of Mira and the planet.[1]

Graia is a strategically important Forge World in Segmentum Tempestus. It houses many Manufactorums, some of which are able to produce Titans. Prior to the invasion Inquisitor Drogan moved to Graia to work on the Psychic Scourge, a Warp-device he wanted to use as a weapon against Orks. In late M41 Graia was invaded by a millions-strong Ork horde, lead by Warboss Grimskull who looked to raid the planet of its powerful weapons, including the Titans of Legio Astraman. Graia issued a call for help. Given its strategic importance, a full scale Liberation Fleet that included squads from various Space Marine Chapters was assembled on Bakka. Warp-travel to Graia would take from 5 to 37 standard days, and call for help was issued to all Imperial forces in the vicinity.

203rd Cadian Regiment was on its way to some other war zone, but was diverted to Graia as the only Imperial Guard force close to the planet. Some of its troops under Corporal Antioch were sent to defend Manufaktorum Ajakis and the Titan 'Invictus' located inside while others defended against overwhelming forces with the remains of the Planetary Defence Forces and fleet vessels in orbit and took heavy casualties in the process. The Orks captured the planetary defence weapons and began to shoot down its support vessels, cutting Cadians off from orbital support and reinforcements. The colonel and his staff were slain in action and Second Lieutenant Mira took the command of the Regiment.

Inquisitor Drogan was holding against Orks in Manufactorum Ajakis. Corporal Antioch's forces brought the acess bridge down and robbed the Orks of their advantage of numbers, holding the Manufactorum gates. At the same time Chaos Lord Nemeroth was planning his own invasion. He knew he could use the Psychic Scourge to open a portal into the Warp and deploy his Warband, The Chosen of Nemeroth on Graia. Then he planned to capture the planet and a Chaos artefact used as a Power Source for the Psychic Scourge. In order to do so he sent a Daemon, who killed Drogan and posessed his body.[1l]

Second to arrive were Ultramarine forces aboard the Strike Cruiser Fury of Descent. Lead by Captain Titus, they arrived on the ninth day of invasion and cut through the battling Ork and Imperial fleets with the objective to cripple the enemy and secure the Titans and other valuable assets on Graia until the arrival of the Liberation Fleet. Using Jump Packs, the Captain's Command Squad made planetfall and quickly engaged in combat with Orks. They contacted forces of Cadian 203rd and, briefed by Mira, entered the defence battery and destroyed the Orbital Gun, allowing the reinforcements in orbit to drop on surface. The Cadians regrouped in Andris Habitation Block and manned its bastion.[1d] Proceeding with their mission, the Ultramarines boarded an improvised battering ram the Orks used to breach the Manufactorum Ajakis walls and destroyed it. After they received a distress call from Drogan's servo skull, they came in contact with the forces of Corporal Antioch and aided them in stopping Orks' assault on Manufactorum gates.[1e]

In Manufactorum Ajakis Titus contacted Sergeant Midas and commanded Squad Solinus to defend the Titan 'Invictus', located in the Manufactorum, against the Orks who found their way inside through the pipe system. Responding to a distress call they met the false Drogan. He told them about the dangers on a Power Source falling into the Orks hands. Titus retreived it, meeting the Grimskull himself in the process. He was exposed to the Power Source's energy, but proved resistant to it.

At the same time, the Orks finally overcame the remains of the Imperial fleet in orbit and their reinfocments arrived, dropping from orbit in Roks. By that time, the Ultramarines reached Andris Habitation Block. Titus reunited with the false Drogan and decided to use the Psychic Scourge located in the Kalkys facility. They fought their way to the Bastion Primus and joined forces with Mira and her Cadians, using their Valkyries to trave to Kalkys. There they fired the Psychic Scourge, compteting their part in Nemeroth's plan.

Upon activation, the Psychic Scourge opened a Warp portal above Graia's Orbital Spire which fed it with energy, allowing The Chosen of Nemeroth to begin their own invasion. Realising it would soon grow large enough to allow a Chaos fleet to pass through, the Ultramarines fought their way back to the Manufactorum Ajakis while Chaos forces leaped through the portal, engaging Orks and the Cadian 203rd. To prevent being cut off, scattered Cadian forces fell back to Bastion Primus and held their positions there. Supported by the Ultramarines they held against Orks and Chaos attacks.[1l] On their way down the chain of outposts between the Kalkys facility and Bastion Primus, the Ultramarines were attacked by Ork Warboss Grimskull and his bodyguagds, who was chasing them in order to get the Power Source. Grimskull was killed by Titus and, without the Warboss, Ork forces lost coherence and could only launch uncoordinated, scattered attacks.

The Ultramarines accessed the rail network once more and crossed to manufactorum Ajakis, delivering the Power Source. Princeps Enoch and his crew boarded Invictus and after the Power Source was used to supercharge its Quake Cannon, it fired upon the Orbital Spire, severing it and closing the Warp portal, trapping the Chosen on the surface and cutting them off from reinforcements. By that time the Liberation Fleet finally entered the system, deploying fresh troops including Space Marines of the Blood Ravens Chapter in siege of the severed Spire. The fleet itself was preparing an all out assault.[1o]

Nemeroth engaged the Ultramarines in person and captured the Power Source to return the dark artefact to the Dark Gods in return for his Ascension to Daemon Prince. Deployed Imperial forces fought Chosen and their Deamon hosts in approaches to Orbital Spire and Ultramarines forces secured Manufactorum Narses. Captain Titus used an Ultramarines Thunderhawk in a suicadal attempt to locate and eliminate Nemeroth. He found him during his final stages of transformation to daemon prince and managed to slay him in single combat, destroying his physical body. Without their leader and a way off world The Chosen of Nemeroth had to face an all out assault by the Imperial forces. While the war continued beyond this point, the Imperial domination was established and Liberation Fleet began to eliminate Orks and Chaos forces of the surface. Graia was quarantined by the order of Inquisitor Thrax.

Graia remained in Imperial hands. After two invasions it suffered severe damage, with much of the weaponry looted or destroyed, but thanks to the actions of the Ultramarines, Titan Invictus and major facilities, such as Narses and Ajakis, suffered relatively low damage. Most Planetary Defence Forces were slain and Cadian 203rd was reduced to a fraction of its manpower. Captain Titus was taken by the Inquisition to be investigated under the suspitions of him being corrupt by Chaos, due to the Warp resistance he had shown during the conflict.

Huge numbers of Orks were slain, but the hardest blow was struck with the death of the Warboss Grimskull, which reduced the Orks forces to disorganised mobs. The remainder are presumed to have been destroyed by the Liberation Fleet.

After the closing of the Warp-portal and banishment of Nemeroth, his Chosen were trapped on Graia and are presumed to be eventually destroyed. Nemeroth's fate is debatable, but it can be presumed he was reborn in the Realm of Chaos as a Daemon Prince. However, given that the Daemonhood was given to him for his conquest, that later failed, one can only guess what kind of treatment he received from the Chaos Gods.

Graia is believed to be one of the worlds attacked and consumed by Hive Fleet Kraken circa 993.M41.[3]