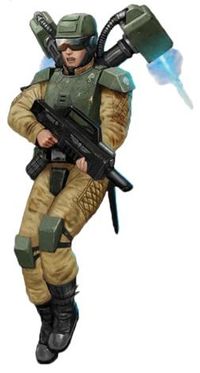 Elysian Drop Trooper with a Grav-Chute[4]

A Grav-chute is a pack-sized suspensor allowing troops to float safely to the ground from any height. It operates via suspensor fields that counter gravity and two small jets on either side of the shoulders that offer further braking of descent. It is used to drop troops onto a battlefield, either from low-flying aircraft or from the upper atmosphere. If needed, it can sustain hovering the user in place for up to a minute at a time. Essentially it is a smaller version of a jump pack, but unlike a jump pack it is only designed to control a fall rather than power a boost up into the air. The power supply lasts for about an hour before needing replacing.[1]

Grav-chutes are most notably used by Imperial Guard Storm Troopers and Drop Troop regiments, such as those from Elysia and Harakon.[Needs Citation]