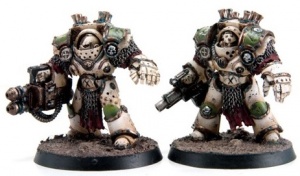 Grave Wardens were the term given to Death Guard biological and chemical warfare formations during the Great Crusade and Horus Heresy.

Originally used as an informal name for variously armed battalions of Death Guard Terminators in the service of Calas Typhon on the Terminus Est, they soon became synonymous with chemical weapon-equipped Terminators unique to the Death Guard.[1]

The Grave Wardens were outfitted in modified Cataphractii Terminator Armour[2] the Grave Wardens were unique among the Legiones Astartes. The Death Guard made frequent use of alchemical weapons such as Phosphex Bombs, the flesh-eating Vastogox virus, and deadly Cullegene gas. Grave Wardens were specially equipped with Astartes Grenade Launchers to disperse these deadly materials over the battlefield as well as continually emitting them with Death Cloud Projection units. They were ultimately unleashed upon loyalist Imperial forces during the Horus Heresy.[1]