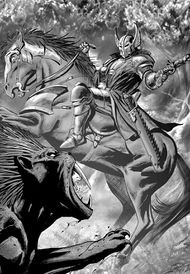 A knight of The Order battles one of Caliban's Great Beasts

The Great Beasts of Caliban were highly aggressive and dangerous fauna native to the Dark Angels homeworld of Caliban during the Age of Strife and potentially before. These monsters, which were of variable shape, size, and power, were eventually discovered to be tainted by the Warp, possibly by the Ouroboros.[1]

The Great Beasts terrorized the population for centuries, until a knightly brotherhood known as The Order arose to combat them. Under the eventual leadership of Lion El'Jonson, the Great Beasts were finally purged from Caliban.[2]