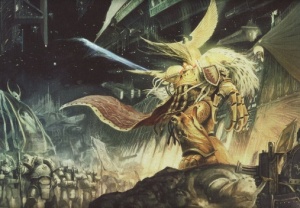 The Emperor with his Space Marines[2]

The Great Crusade (~798.M30 — 005.M31[1]) was a brief age of rebuilding and reunification following the complete regression of mankind during the Age of Strife. It was a time when the Emperor still lived in the conventional sense and led his race in person. It followed the Emperor's conquest of Terra in the Unification Wars and lasted roughly from the conquest of Earth's moon to the Battle of Isstvan III and the beginning of the Horus Heresy.

Part of the Emperor's vision of human unification was the Primarch Project, meant to be the creation of 20 superhumans to lead the Emperor's forces to reclaim the galaxy in his name. It also saw the creation of the Space Marine Legions from the gene-seed samples that survived the scattering of the Primarchs by the Chaos gods. These forces would play the major role in the upcoming Great Crusade alongside the Imperial Army, Titan Legions, Legio Cybernetica, Sisters of Silence, and Custodian Guard.[Needs Citation]

The subsiding of the warp storms plaguing much of the galaxy coincided with the end of the Age of Strife. With warp travel feasible again, the Emperor was able to begin the Great Crusade which would create the Imperium. Even before the warp storms and the Age of Strife had ended, the Emperor had begun to make plans for the Great Crusade. These plans included the creation of a far more advanced form of power armour required for the conditions of deep space and alien worlds[1].

After securing Luna and then Mars, he began a great building project, reconstructing the industries and production facilities he would need to construct and maintain a great space fleet, sufficient to carry his legions all the way to the edges of the galaxy. Mars, due to its advanced technology and manufacturing infrastructure, became the center of this development, producing, along with ships, the arms and armor his warriors would be equipped with[1]. Saturn, Neptune, and Jupiter fell to the Emperor next, its inhabitants liberated from cruel alien overlords. Finally, the Imperial War Fleet broke out of the Sol System system after completely annihilating the "false world" of Sedna.[7a] 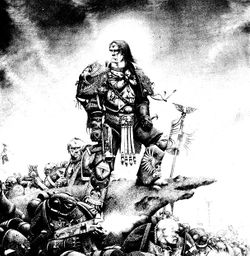 The Emperor and his Space Marines

His fleet constructed, he forged out into the depths of space, seeking out his Primarchs and spreading the name of the Emperor. Throughout the following millennium, he gradually reclaimed his Primarchs, and slowly united humanity under the Pax Imperialis. World after world fell to the Emperor's forces, at first the Legio Astartes and Custodian Guard and later the Imperial Army, Sisters of Silence, Collegia Titanica, Legio Cybernetica, and others. Tyrants and false-rulers of thousands of worlds were overthrown by Imperial forces, who quickly outlawed religion and dogma by decree of the Emperor himself. Orks, Eldar, Hrud, Slaugth, hideous Warp entities, and many other lesser alien races were all defeated and driven back in a seemingly unstoppable tide of conquest. Worlds whose human population had become too corrupted or mutated were simply exterminated from orbit.[7a]

In the early stages of the Crusade, the Imperial forces were divided into three main thrusts, one commanded by Horus, the other by Ferrus Manus, and the last by the Emperor himself.[8] As each Primarch was discovered, he was given control of his own Legion of Space Marines. As more of the Empire was carved, the Emperor's forces were spread more and more thinly. Eventually the need for Space Marines was greater than the supply. As such, Accelerated Gene Culturing was necessary to provide sufficient legions. Unfortunately, this process was unstable and led to flaws in the gene seed of the legions. This would lead to such afflictions as the Red Thirst and various mutations in the Space Wolf gene seed.[Needs Citation]

The Crusade lasted for around two hundred years. At its peak, it had over 4,300 Expeditionary Fleets involved in galactic conquest. The Great Crusade reached its apex with the great victory by Horus against a massive Waaagh! of Orks in the Ullanor Crusade. After this victory the Emperor declared Horus Warmaster, or acting Supreme Commander in his stead. Having seen most of humanity reunited the Emperor returned to Terra, where he began his secret project.[5]

Towards the Great Crusade's end came a period of political consolidation. The Legions were at this point dispersed across the galaxy, many acting as garrison forces rather than campaigning armies. The Legions had been battling constantly, especially the Iron Warriors, struggling under the monotony of siege warfare and garrison duties. A large bureaucracy overseen by Malcador and the Council of Terra formed to manage the newly conquered territories. This bureaucracy often clashed with the Astartes military established, and tensions began to run high when it became apparent that the Emperor intended to have Malcador's Terran Council rule over the nascent Imperium and not the Legiones Astartes.[5]

Also, without the Emperor's guidance the Primarchs that had previously friendly rivalries were beginning to develop into dangerous feuds. Some of the Primarchs had reached the point of intolerance with one another, others like Magnus the Red had simply become isolated in the confusion of the Great Crusade. Already the Word Bearers Primarch Lorgar had secretly turned against the Emperor decades before the Crusades end after the destruction of his "perfect city" of Monarchia by the Ultramarines. Meanwhile Leman Russ clashed with both Angron and Lion El'Jonson. Perturabo was shunned by most due to the nature of his hand in the Crusade and was in turn envious of Rogal Dorn. Konrad Curze also had a disagreement with Dorn that escalated into a brutal surprise attack that left Dorn badly injured and unconscious. This mistrust and hatred would form the linchpin of the Horus Heresy.[Needs Citation]

The End of the Crusade

The age of the Great Crusade ended with the virus bombing of Isstvan III by Warmaster Horus, which announced the beginning of his Rebellion. The loyalist legions were recalled to Terra to defend against the traitor Warmaster, but not all of the Legions were able to return. The Ultramarines were mired in the Ultramar system fighting Kor Phaeron and his retinue of Word Bearers that had come to destroy them. The Space Wolves were finishing their battle at Prospero with the now openly traitorous Thousand Sons, the White Scars were mired in the Chondax Campaign, and the Dark Angels were in the midst of a civil war on Caliban and a slow campaign against the Gordian League.[Needs Citation]

In many ways the Emperor was now gone, The Imperium suddenly finding itself without the great leadership of the Guardian of Mankind. The brief age of recovery which the Great Crusade represented was over, and mankind began to decline into the state it is now, with fear and chaos rife, Inquisitors seeking out heresy at every corner and billions of people living in forced, and willing, slavery to their God-Emperor.[Needs Citation]