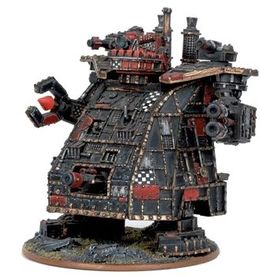 Great Gargants are more powerful versions of the Ork Gargant, being larger in size and sporting more weapons and Kustom Force Fields. They are somewhat rare as the amount of bullying required to get them built ensures that only Ork Warbosses can raise their massive bipedal forms. Great Gargants are a potent threat to any enemy force.[1]

Great Gargants are heavily armoured and can sport a wide variety of weapon-systems. They often double the amount of 'Soopaguns' found on smaller Gargants, sometimes by a form of crude twin-linking that seems to involve huge amounts of rope, chains and nails. Arm-mounted Gatling Cannns and head-mounted Battle Cannons are also common.[2] As well as a battery or two of artillery pieces, Great Gargants often feature fearsome 'belly-guns' and high-powered energy weapons mounted in the head section. Such a weapon emplacement is often referred to as the Gaze of Mork, Mork being one of the Ork Gods. Another notable weapon often found mounted on Great Gargants is the Lifta-Droppa, a fearsome application of Traktor Beam technology.[1] For close combat, Great Gargants often wield Snappers and Ripper Fists.[2] 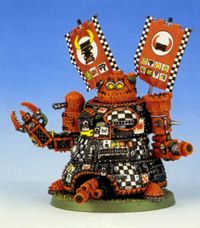