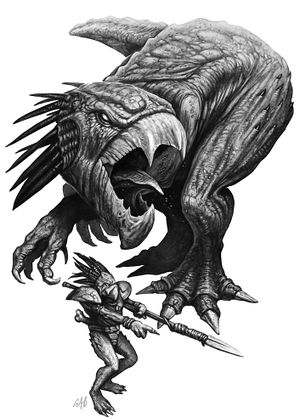 A Kroot goading a Great Knarloc

The Great Knarloc is a Kroot beast native to the jungles of Pech. They are larger than the more common Knarlocs.[2]

Great Knarlocs are an evolutionary dead end, much like the Krootox and Kroot Hound. It is a solitary hunter in the jungles, suited by its muscular legs and hinge ankles for long distance tracking. Its lower legs and claws are developed for occasional bursts of speed, enhanced by the Hyperactive Nymune Organ, and it can use its toes to launch itself from cover whilst stalking its prey. All of its developments put it firmly in the hunter/scavenger category, aided by its omnivorous nature.[2]

While Great Knarlocs are usually docile, but when angered they display savage burst of violence[1], the addition of sufficient goads can enrage the Knarloc to the point that they will attack anything nearby. Usually other Kroot are relatively safe due to the pheromones they excrete, but they are not immune to the animal instincts that Knarlocs show. Like other Kroot, they are subject to the Hyperactive Nymune Organ, which enhances their already superior ability to chase prey for long distances to cover large amounts of ground quickly.[2]

They have smaller frontal limbs, which they use to grasp food and to scavenge in undergrowth or soft earth. They have poor eyesight. It's large mass makes them mostly invulnerable to small arms fire and they are tremendously resilient to wounds that would cripple most other beasts. Targeting the handlers is a risky tactic, for without them the beasts become even more enraged and often attack the nearest prey, friend or foe, with renewed savagery.[1] 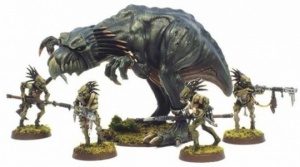 A Great Knarloc being goaded into battle.

Great Knarlocs which are young to middle aged are herded in groups of one to three and used as assault troops alongside the Carnivore squads. They are enraged by a group of up to 8 goads and a shaper and proceed to use their vicious beaks to break apart armour and crush their prey.[2]

They are used as living battering rams and are selected for their speed and aggression, which is moderated by pheromone excretions produced by the handlers. A fully-grown and suitably goaded Greater Knarloc is capable of tearing armour panels with its huge beak and smashing an armoured vehicle apart.[1]

Great Knarlocs which are older and more used to being controlled by the Kroot can be used to carry a heavy weapons (similar to the Krootox). This is often a Kroot Bolt Thrower or a Kroot Gun manned by two Kroot. They also form herds between one and three Knarlocs.[2]

Imperial forces facing Great Knarlocs have found it necessary to treat them as enemy vehicle targets and bring anti-armour weaponry.[1]

The Baggage Great Knarloc is a Kroot beast of burden, used to carry heavy equipment and supplies. Great Knarlocs are strong with great stamina but are lacking intelligence, which makes them easy to lead once they are domesticated. They suffer from bouts of aggression however, leading them to be muzzled at all times and chained when not in use. Each Great Knarloc has one or two goads to guide it in the right direction and form herds of between one and three Great Knarlocs. Should they be required to fight, the Handlers will goad them to their enemies to vent their anger.[1][2] 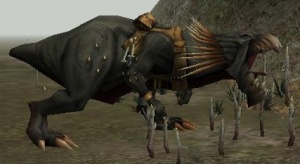 A Greater Knarloc in Dawn of War: Dark Crusade