The Great Rift, known to the Imperium as the Cicatrix Maledictum, is a new chain of catastrophic Warp Rifts that has divided much of the Galaxy.[1]

This new tear in reality was created at the end of the 41st Millennium during the Thirteenth Black Crusade following the destruction of Cadia. The origins of the Great Rift remain a mystery, with theories ranging from it forming due to the destruction of the Cadian Pylons at the end of the 13th Black Crusade, to sorcery used by Magnus the Red during the Siege of the Fenris System, to the awakening of Ynnead, mass bloodshed in the Damocles Gulf, and the reaction of the Ruinous Powers to the rebirth of Roboute Guilliman.[1] Guilliman speculates that the Rift formed after Abaddon strategically destroyed worlds rich in Blackstone over ten thousand years, with the destruction of Cadia as its trigger.[7] All that is truly known is that its emergence was a literal galaxy-shattering event that divided the Imperium in half and ushered in new wars across nearly every world in the Emperor's Empire. In a catastrophic event known as The Blackness, many worlds of the Imperium were cut off and overwhelmed by the Forces of Chaos as Warp Travel and Astropathic communication were rendered nigh-impossible.[4a]

So powerful and far reaching was this Warp Storm, that the very laws of physics have begun to fray and the inconsistencies of time fluctuations, once largely localised to larger storms such as the Eye of Terror, have spread across the entire known galaxy. Since the Great Rift's creation, some worlds have felt centuries go by in an instant, while others have been all but frozen in time and still others have suffered constant temporal shifts.[1]

The Great Rift is variously known by the cultures of the galaxy as the Crimson Path, the Mouth of Ruin, the Warpscar, the Dathedian, Gork's Grin and a thousand other names besides. Space Wolves and folks of Fenris named Great Rift as Everdusk.[6] To the Tau, the Great Rift is known as the Mont’yhe’va or "Devourer of Hope", for its stellar storms killed millions of Tau and left many colonies devastated.[5] To the Imperium though, it is the Cicatrix Maledictum, and it appears to those on the western side of Segmentum Solar as a tainted scar across the sky. To those unfortunates on the eastern side of the Segmentum, however, now known as the Dark Imperium, it is far worse.[1]

In response to this new catastrophe, the Primarch Roboute Guilliman, now Lord Commander of the Imperium's armies, has launched the Indomitus Crusade. Its aim is to liberate those Imperial worlds that now find themselves embattled by the forces of Chaos, following the Great Rift's creation.[2] The Indomitus Crusade was able to exploit at least one passage through the Great Rift, located near the Eye of Terror in the Nachmund Gauntlet.[4b] Inside the Rift itself, the Gods of Chaos have embarked in an extension of the Great Game, battling one another for supremacy in what has become known as the War in the Rift.[4c]

According to Mathieu, the Forces of Chaos made a grave mistake by opening the Great Rift for it is also empowering the Emperor and allowing for his eventual return.[8] 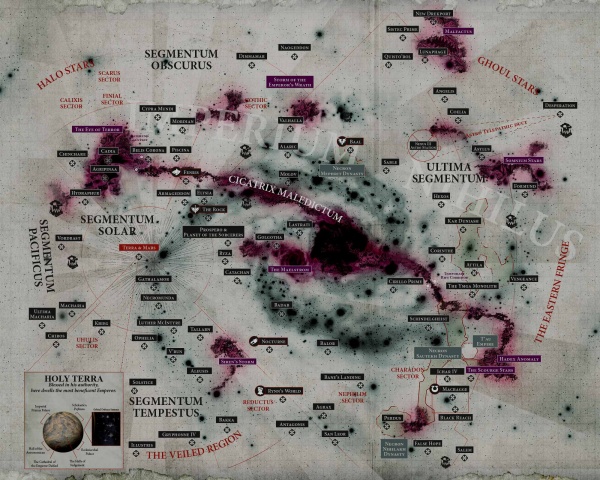 A map of the Imperium following the creation of the Cicatrix Maledictum, more commonly known as the Great Rift.[3]