From Warhammer 40k - Lexicanum
(Redirected from Great Unclean Ones)
Jump to: navigation, search 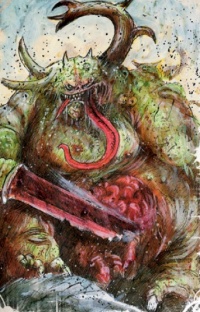 Great Unclean Ones are the Greater Daemons of Nurgle. In form they are massive and bloated with disease and decay, and their necrotic and boil-covered flesh is rent, where their organs spill out, hanging across their huge girth. Great Unclean Ones can endure tremendous amounts of damage before being felled. Many opponents cannot stomach to look at a Great Unclean One, let alone fight one.

Great Unclean Ones typically take the form of gargantuan, immensely fat humanoids, hot intestines dribbling out of huge tears in their enormous bellies. Their horrific girth is supported by two impossibly small and atrophied-looking legs, their swollen heads are crowned by enormous stag-like antlers. Their suppurating, sore-covered bodies are host to every disease ever catalogued by man or daemon, and their stench can be detected from miles away.[Needs Citation]

In combat, Great Unclean Ones wield enormous blades and maces of iron, crude, corroded cleavers and immense plague flails — each one dripping with pestilence.[3] Frequently they carry a blade known as a Plague Sword - these massive, rusted blades are said to be dipped in the foul pus and contagion at the base of Nurgle's throne.[2]

Despite their completely bloated and putrid appearance, Great Unclean Ones are neither deathlike or morbid in character. In fact the opposite is true, and the daemons are motivated by all the trivial human enthusiasms which drive the living. They are gregarious and even sentimental in nature, and hold their followers dear, even referring to them as their "Children", and taking an obvious pride in their appearance and endearing behavior.[1] Even surrounded by the pitiful moaning of the sick and dying, they smile with pure-hearted benevolence, and their long, pus-coated tongues dangle from toothy, face-splitting grins.[3] 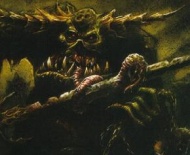 Their appearances on the mortal plane are heralded by disease and desolation on a planetary scale. If an incursion is left unchecked, whole worlds can go dark: their populations reduced by six-sevenths, their feeble leaders filthy and raving, their very cities collapsing around them. Through it all waddles the beaming, bile-slicked plague-father, bestowing his blessings, borne along on a living tide of chortling, chattering Nurglings. Great Unclean Ones are beings of decay and entropy made manifest, and before them the works of man are but castles made of sand, perched on the edge of a storm-wracked sea.[3]

Those that survive the wave of desolation that accompanies a Great Unclean One often become its faithful slaves. Wracked by disease, bloated by corpse gasses, stripped of their loved ones and surrounded by the dead and dying, many plague thralls give themselves over to their suffering, venerating and worshipping the very ailments that brought them low. Perversely, those who embrace Nurgle’s foul contagions are made stronger by them, their ravaged bodies inured to pain, their rotting forms all but impervious to greater harm. The thriving colonies of bacteria gestating within their bloated bodies grant unholy regenerative abilities to their hosts, sealing gaping wounds in seconds and expanding ever outward, until the creatures that were once men remain little more than disease-wracked shells, foetid human cauldrons of pox and pestilence.[3]

Great Unclean Ones are always accompanied by - and infested with - thousands of gibbering, diminutive Nurglings, pint-sized daemons of mischief and malice who caper about madly, tongues lolling, their fat bodies supported by improbably spindly legs. Great Unclean Ones dote on these scabrous sprites, bouncing them on their knees and scratching behind their malformed ears. Even the rotting hulks of their bodies are colonized by Nurglings; these tiny creatures dwell in the burst carbuncles and rank wounds that cover a Great Unclean One, and particularly love to nest within its great, rent belly, burrowing deep inside the teaming intestines that hang in long, gore-slicked loops from its body. A Great Unclean One looks upon this cackling horde with munificence and paternal love, and Nurglings are quick to defend their "father" when he is threatened. Unwary foes are often dragged down by the murderous wave of shrieking, biting daemons that billows forth from the body of a Great Unclean One the instant it is attacked.[3]

To look upon a Great Unclean One is to gaze upon the face of decay, to realize that all things must break down, must collapse and congeal, must rot and rust and fall to ruin, that the great works of man will one day vanish from the universe, and the stars themselves must one day die. [3]