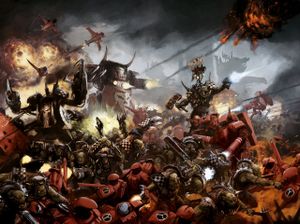 Battle between Orks and Tau.

The Great War of Confederation, beginning 975.M41, was a large war fought between the Tau Empire and several Ork Waaagh!'s. Along with Hive Fleet Gorgon, it was the first time the Tau Empire truly fought for its own survival, and its effects helped pave way for the Third Sphere of Expansion.[1]

Shortly after the Farsight Expedition, ragtag Ork armadas suddenly emerged from the Western Veil Nebula. A staggeringly massive Greenskin fleet appeared, composing of several Warbosses each vying for overall supremacy. Given the size of the Ork armada, at first the Tau believed their scanners to be malfunctioning. However when the Tau did realize what they were facing, only the decrepit state of the Orks' spacecraft and their incessant infighting allowed for Tau preparation. The Tau nonetheless doubted they could stand before this massive threat, until Ethereal Supreme Aun'va gathered the leaders of every Sept and rallied them to a common cause - survival.[1]

Aun'va gathered the Septs closest to the Ork forces - Vior'la, Sa'cea, and Tau'n, and had them combine their forces in a delaying attack. Behind them, all other Septs would rush troops towards the front in a counterattack. The first battles of the war took place as the Tau Fleet launched hit-and-run attacks to stem the greenskin tide and lure their ships within range of powerful orbital defence stations. While this caused heavy Ork losses, a few greenskin sabotage ships managed to crash into the Tau stations and wreak havoc. Fire Warrior defenders were soon deployed aboard the remaining stations, and many desperate battles that lasted for months raged in the depths of space.[1]

By this point, each individual warband of Orks separated to follow their own goals, and this had the effect of breaking apart the Ork front and spreading it out over more than a dozen worlds. Whenever Orks made planetfall, the Tau garrison was reinforced with additional ground forces and stubborn defensive campaigns were waged. The Tau repeated this strategy on any location, even barren moons, for they believed that the Orks could not be given even a single foothold. Eventually the threat of total destruction was forestalled, and Aun'va deemed that the time was right for the next phase of his plan. Commander Shadowsun was taken out of stasis and by the time she had completed her reindoctrination, the war had been waging for six years. Shadowsun's leadership proved decisive, and leading her Hunter Cadre's was able to break the stalemate that had since endured. Shadowsun oversaw the clearing of Sa'cea, allowing for Tau forces to be cleared up and moved to new fronts. Like a star Shadowsun strode through the space from Vay’harra to Kormusan, defeating Orks without remorse.[3] After the massacre of Orks at the K'resh Expansions, the Greenskin hold in the region was broken.[1]

After a dozen years of hard fighting, the Great War of Confederation had finally come to an end and Commander Shadowsun was eventually given command of the Third Sphere of Expansion.[1]

It is also known that during this war the XV88 Broadside massively change their Heavy Rail Rifles to Missile Pods to better tackle the Ork hordes that repeatedly assaulted their lines.[2]