The Greater Thurian League is a massive League of the Leagues of Votann, that is commonly known as the GTL to other Leagues.[2] 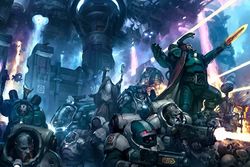 One of the original founding Leagues, as of its most recent count the Greater Thurian League consists of over two hundred allied Kindred. Between them they boast vast fleets of ships and huge armies of Kinhost warriors. Huge and wealthy guilds such as the Yngvâry Combined Logistics, the Starstriders Mercantile Confederation, and the Cthonian Guild of Kâdokh see the League's continued and immense prosperity. The Greater Thurian League have long ventured outside the Galactic Core, whether to trade, explore, or fight as mercenaries in Prospects. Recently, they have settled into the neighboring Marsalis and Sepulchor Sectors outside of the core in levels unseen. The remit of these forces is to claim new worlds for those dispossessed by the Great Rift or fight back Chaos invaders vying for the Core.[3d]

Though its forces are spread far and wide, the GTL consolidates on the home front while forging forward to claim new lands for Kin that have been dispossessed by the forces of Chaos. Legendary heroes such as Ûthar the Destined also hail from the League and they exemplify Kin values and act as a guiding force for all.[2]

Members of the Greater Thurian League tend toward the core Kin values of trade and prospecting, and are known and respected for being especially mercantile.[3b]