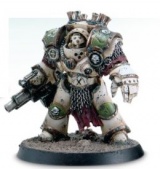 A Grenade Launcher unique to Death Guard Grave Wardens.[15] A smaller hand-held version often used in pairs has been seen in use by House Goliath gangers.[21]