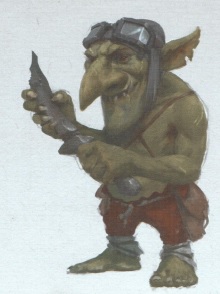 Gretchin, Grots or Runts are a lesser Orkoid slave race who do the menial tasks which Orks consider themselves above.

Gretchin have a similar physical structure to Ork but are much smaller and weaker. They have short runty legs and grasping fingers to employ their greatest skill, low cunning. They are far more numerous than Orks and have large bulbous heads with tattered ears which flatten when they are scared. They have sharp fanged jaws which are their best physical weapon. They have an excellent sense of smell, hearing and they have effective sight in the dark. These traits aid their self-preservation allowing them to survive in the dangerous Ork society. Some Gretchin have even developed a sixth sense of sorts, or a natural ability to be far more fortunate than they have right to be.[1]

The Gretchin are happy enough in their role. They bear little resentment towards their superiors, for them Orks are just a fact of life. Individual Gretchin can enjoy a relatively comfortable existence by providing valuable services to their Ork masters. Most Grots are owned by Orks as personal servants, though some gather together into loose tribes that may even own functional weapons and equipment. The Gretchin have created an entire enterprise culture of their own within their Ork-dominated society. Many Gretchin operate their own black-market businesses on the side, such as selling fungus-beer, roasting squigs on sticks, coordinating the bets when a fight breaks out or looting corpses for fun and profit.[1]

There is a faction known as Rebel Grots who had too much of their rough treatment and rebelled against their masters. Because of their organisation skills they could sometimes build and maintain war machines and artillery.[2]

Because Gretchin are synonymous with cunning, small stature, cowardice, negligent physical prowess and other things considered un-Orky, the term 'grot' is used derisively between the larger Ork boyz. i.e. - "Da' boss needs some real boyz to do this job, not you pack of grotz!"[Needs Citation]

Though they usually obey to Orks, Gretchin could live on their own - on planets where only Gretchins settled and even could create small Empires in space, that apes Orks empires completely.[9]

Grots who are assigned horrible jobs in Ork camps[17]

These Grots are Psykers and the equivalent of Ork Weirdboyz.[10][13]

These Sneaky Grots gravitate to Kommandos and join them on missions. However to Kommandos themselves, they are referred to as "Distraction Grots"[15][16]

Gretchin are known for their poor combat abilities, but they compensate for this by sheer numbers. They often go to war with a basic gun firing volleys of scavenged ammunition before falling on their enemies in an fury of killing, ripping them to pieces with their teeth. Orks use Grechin mobs in battle to do everything from minefield clearance to meat shield to living carpet. Some "lucky" Gretchin get to crew Orky artillery known as Big Gunz, and while they are not on the front lines of battle, crewing Big Gunz often comes with hazards such as electrocution, dismemberment and almost assuredly deafening of the crew. Other uses for Gretchin in battle includes their piloting of Killer Kans, smaller, Gretchin-crewed Deff Dreads, into battle, and their use as turret gunners on vehicles and emplacements. They sometimes also accompany Ork Warlords and Flash Gits as ammo runts, follow Mekboys into the fray as oilers, and run around as orderlies to Painboys. A caste of Oddboyz known as Runtherds acompany the Gretchin into battle, and they are often needed to keep the Gretchin from fleeing the battle. These Orks ofen employ Squig-hounds and Grabba-Stiks to keep their charges in line.[1]