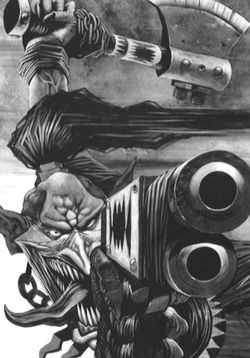 The Rebel Grots are one of the four factions of Gorkamorka

The Gretchin Revolutionary Committee (in short, G.R.C.) has its roots in the tag system introduced for Grots on Gorkamorka by the Mekboyz. The tag system stipulated that you can only get on board once the big Waaagh! starts if you only have a tag. As Grots do not receive tags, many Gretchin considered this unfair. Though they slave away for the Orks and are abused, the prospect of never leaving on the great Waaagh! was the final straw. As soon as word got out about the tag system, Grot revolts began all across Mektown. The Gretchin rioters had many slogans, such as "Tags For All!", "We'z all Green!" "What da we want? TAGS! When do we wannem? NOW!", "Equal Rides", and "Meks are Skum!". The Meks and their enforcers tried to put down the initial revolts, and many Grots were herded into pits and never heard from again. However, the Mekz could not quash the spirit of Gretchin revolution that had broken out and things soon escalated out of control. One day, the Orks discovered that the Grots had stopped working and were on effectively on strike.[1]

The striking Grots engaged in the "March to Freedom", demonstrating across Mektown and calling for "equal rides" for the Gretchin. After tense negotiations with the leading Mekboyz of Mektown, the situation broke down when a group of Orks attacked the Gretchin demonstrators. This was a foolish action for the Greenskins, as the roar of revolution erupted across Mektown. Though physically superior, the Orks could not deal with the overwhelming numbers of Grots. Mektown became a series of running battles, with Grots laying in wait in slophouses and alleys to ambush Orks. In the end, the Orks superior firepower allowed them to prevail and the Grots were beaten back. The rebel grots made their way back to Skid Row, the Grot center of Gorkamorka, in an event long as the Long March. Facing Ork attacks, freezing cold, and whip scorpions, many Gretchin died on the grueling trek. Once in Skid Row, the surviving Grots vowed revenge against their Ork cousins. They organized themselves into a revolutionary army, led by "Da Kommittee".[1]

From Skid Row, the Rebel Grots continue their fight. They raid Ork mobs as they return to Mektown and storm poorly defended forts to steal scrap and wreak havoc. Over the subsequent centuries, the poor conditions in Mektown for its Grots has continued to provide the GRC with a steady stream of recruits. The GRC operates a secret smuggling network out of Mektown to enable eager Grots the opportunity to escape. The GRC prepares for "Da Big Day", the day when Ork power in Mektown will finally collapse.[1]

The Rebel Grots are a ragtag mob, dressed predominantly in red - to them, the colour of "Da Revolushun!"

Da Kommitte rules over the grots, dictating what happens and planning raids on Mektown. Da Red Gobbo is head of Da Kommitte, and often fights with the Warbands. Under Da Kommitte are the Head Honchos, leaders of the Rebel Grot warbands. Next in the chain are basic grots, with snotlings right at the bottom.

He is the most bitter member of the Rebel Grot mob. Driven to extreme lenghts by the total injustice of the tag system, he has gathered together a band of Rebel grots to go out and force the Orks to deal with the G.R.C.'s demands.[1b]

Most Rebel grot mobs have a Banna Waver. he carries the Flag of the Revolution, proclaiming the endeavours of the mob and their unswerving loyalty to the GRC.[1a]

Banna Waver are choosen because of their dedication to the Revolution and their prodigious strenght - needed to carry the huge Flag of the Revolution. They are a stirring sight to their comrades as they lead them into battles.[1b]

Rebel Grots often have a lack of ammo for their weapons, and so use of mechanised vehicles is impractical for them. Instead, they use Cuttas and Big Luggas, ramshackle constructions made from wood and metal. The cuttas are powered by a single triangular sail, relying on good wind. Big Luggas are more heavily armoured, and rely on grots and snots pumping various handles to make the vehicle go faster.

Rebel Grots favour up-close-and-personal methods of combat, boarding enemy vehicles by weight of numbers and using close-range weapons such as blunderbusses, kannons and pistols. Their vehicles, especially Big Luggas, are often festooned with boarding planks, grapnels and other items making boarding easier for them.