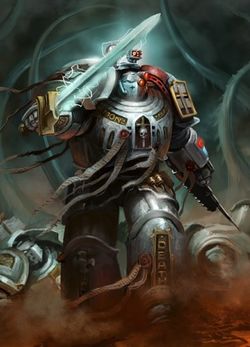 As with the Apothecaries of other Chapters, it is the duty of a Grey Knights Apothecary to not just heal his battle-brothers but also recover the Gene-Seed of fallen warriors. This is the lifeblood of the Grey Knights, and is their genetic link to the Emperor himself. By harvesting the gene-seed of the fallen, Apothecaries ensure the survival of the entire Chapter, even if an individual battle-brother may die. Once a Grey Knight has received honors enough to become an Apothecary, they are trained in advanced combat triage and taught the sacred rites of creating new Adeptus Astartes using harvested gene-seed by the Chapter’s existing Apothecaries. Unlike those in most Space Marines Chapters, Grey Knights Apothecaries learn a series of ritual blessings that are performed on every bio-implant to form an enduring ward against daemonic incursion. Due to the importance of their duty, Apothecaries are typically well-defended on the field of battle, with others of their brotherhood forming a shield around them. In addition, as with all members of the Chapter a Grey Knights Apothecary is a formidable Psyker in his own right.[1]