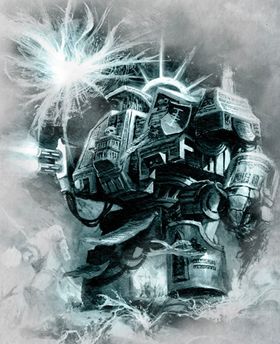 The Grey Knights Dreadnought is a similar design to the Space Marine Dreadnought, but unlike other chapters, being interred inside a Dreadnought chassis is not seen as a great honour, and Knights who aspire to such a fate are rare; most simply yearn to rest in the cool of Titan for the rest of time. However, if the warrior is gravely wounded, but not enough to die, then he will often see the necessity of being placed within a machine.[1]

Standing twice the height of a man, a Dreadnought's fury is an awesome sight to behold, and each is armed with the most fearsome weaponry that the Chapter holds. Their very movements cause the ground to shake as their furnaces roar in the heat of battle.[2]

Their advances on the battlefield can cause enemies to scatter and their adamantium-armoured hides can shrug off weapons fire from their foes. Though fearsome opponents, the greatest gift a Grey Knight Dreadnought can provide is support to their brethren in the form of psychic defences. This is because their sarcophagi contain psyber-circuitry which can link their own Aegis field to that of their Battle-Brothers, thus creating a series of wards that are much stronger than the sum of their parts.[2]

It is ultimately considered not the weaponry nor the armour of the Dreadnought that makes them such terrifying weapons, but the warriors within who long ago were wounded to the point that they now dwell within a cyber-organic sarcophagus. As only the mightiest are ever given this honour, fighting them is no simple feat, as their enemies face not a mere machine or a great hero of the Chapter but a warrior whose mechanised form is as unflagging as their will.[2]

A Grey Knights Dreadnought is seen as a living connection to the Chapter's many years of history, and each chassis is considered an ancient artefact, rather than a weapon of war. The Dreadnoughts represent the living embodiment of glorious victories, great deeds, slain heroes, unquestionable loyalties and proven honour. Thus, they serve as a potent symbol of what the Grey Knights are and what they stand for in their service to the Imperium. In this way, they provide their Battle-Brothers with a legend that the latter strive to emulate.[3a]

This makes them precious and worthy of the utmost respect, as they are venerated for the wealth of experience and wise council that they provide to their brethren. Through a Dreadnought, the spirits of the Chapter's ancestors continue to live on and this helps the Grey Knights in their fights on the battlefield. Each of the ten companies has its own Dreadnought, all of whom are former heroes of the company. Typically, they are former Grand Masters, Brother-Captains or, in special cases, low-ranking Battle-Brothers who demonstrated exceptional courage and heroism in battle.[3a] 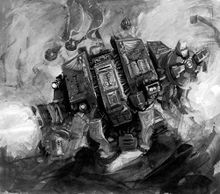 A Grey Knights Dreadnought in combat

Dreadnought are such experienced warriors that they can adopt any role on the field of battle once they are fully awakened. They are equally capable of spearheading an assault, providing long-range fire support, or even serving as a secondary commander of the main strike force. These Venerable Dreadnoughts are seen as living legends to their Battle-Brothers who often redouble their efforts whilst in their shadow and are never found wanting.[2]

It is customary for personal consent to be given before the procedure can begin to place a mortally wounded Grey Knight Space Marine into a Dreadnought. This is because many Battle-Brothers prefer to rest in peace as heroes of the Chapter in the tombs below the Fortress-Monastery on Titan. There, the name of the Grey Knight is engraved in their crypt alongside other great warriors which is a fitting end for their lifetime of service to the Imperium.[3a]

One notable case of consent, according to legend, is the story of Grand Master Orias, who lay in the Apothecarium after battling the Daemon Prince Herperitus. Whilst being tended to by the Chief Apothecary and his servo-meds, the entire Chapter assembled to await his death, with all ten Brother-Captain's watching over him until his soul would fall into the Emperor's care. Orias's shattered body remained unmoving like this for three days, which made it appear as if he had already died, but instead the Grand Master simply gave a single nod of his head. The Brother-Captains debated and ultimately agreed that Orias had signaled his consent to being placed within a Dreadnought.[3a]

These great warriors are summoned only during times of great battle, where victory cannot be achieved through the valour of mortal men alone. In such times, it is decided that the greatest heroes of the Chapter need to be assembled, and during such moments the Master Armourers of the Grey Knights enter into the Chamber of Heroes in order to awaken the Dreadnoughts. To wake them more frequently, the Grand Masters feel, is to dishonour their gift of service. Thus, once the dark time the Chapter faces is over, they return to the Chamber of Heroes to dream of battles yet to come.[2] 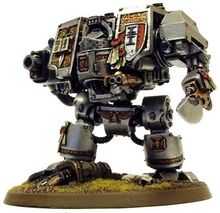 This configuration of Grey Knights Dreadnoughts appeared during the Garanhir Rebellion where the 7th Brotherhood of the Grey Knights was faced with great hordes of the Bloodletters. In such harsh circumstances it was decided to arm Dreadnoughts with the Nemesis Doomglaives, psychically attuned blades which were fitted to one arm of the Mk IV Dreadnoughts, and also with a Psycannon — in other hand. This combination proved so efficient that only through those Dreadnoughts 7th Brotherhood managed to destroy a huge waves of advancing Daemons and eventually got a victory. Since that this type of Dreadnoughts was codified 'Doomglaive' and entered the basic doctrine of the Grey Knights, especially used in battles when Chapter was confronted with the massed daemonic infantry, mutants or Chaos cultists.[4]