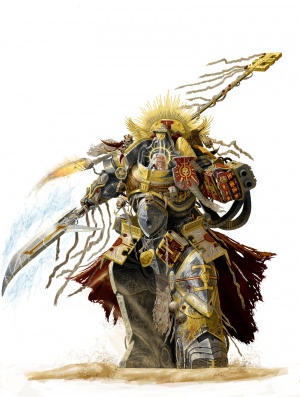 Grand Master is one of the highest ranks to which a Grey Knight can rise, below only the Supreme Grand Master.[5]

Grand Masters are armed and armoured in the best the Imperium has to offer and benefit from hundreds of years of experience in fighting the daemonic. They are devastating in close combat, especially when backed up by a retinue of the feared Grey Knights Terminators. While all Grey Knights are psykers, the Grand Master's skills are honed to such a fine point that he can wield his psychically attuned Force Weapon with exceptionally terrific power. The Grand Master is certainly one of the greatest warriors in the entirety of the Imperium.[1]

The Grey Knights only have a total of eight Grand Masters at any one time. This number is derived from the eight founding Space Marines which Malcador the Sigilite brought to Titan.[Needs Citation]

The nine original Grand Masters of the Grey Knights were known as: