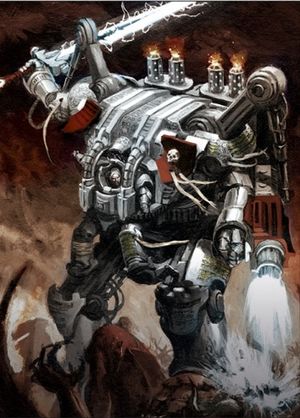 A Grey Knights Nemesis Dreadknight is an artificial construct of humanoid shape made of adamantium alloy, ceramite plates, and a compact yet powerful plasma reactor. It was first developed by the Grey Knights to take on Greater Daemons of Chaos.

The origin of the Dreadknight is unclear, but it seems to be a relic from the Dark Age of Technology; some whisper it to be of Xenos influence. For the Grey Knights, however, this is irrelevant, as all that matters is the machine's fearsome capabilities against Daemons. Few organizations in the Imperium could afford such a lax attitude against possible techno-heresy, but the Grey Knights' position within the Emperor's domain sees them answer in theory only to the Inquisition.[3]

The Dreadknight comes equipped with two Nemesis Doomfists, which can be replaced with either a Nemesis Greatsword or a Nemesis Daemon Greathammer. Underslung from those two Doomfists or Force Weapons, a Dreadknight can further take two different ranged weapons, including a Heavy incinerator, a Gatling psilencer, or a Heavy psycannon. It can also take a personal teleporter, which allows it to strike at the heart of a Daemonic infestation.[1a][1b] 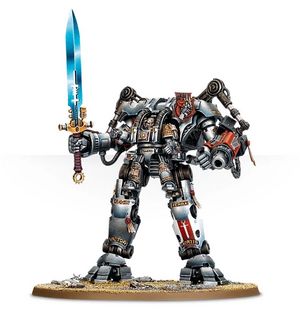