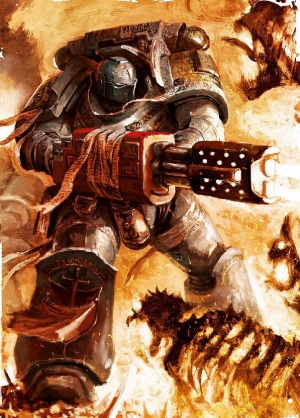 A Grey Knights Purgation Squad is made up of between two and nine Grey Knights Marines and one Justicar. They are armed with Storm Bolters and Nemesis Force Weapons but up to four may exchange these for Psycannons or Incinerators.[1]

Purgation Squads provide heavy firepower in certain situations, although their small numbers are a constant danger. They usually deploy in support of Grey Knights Squads during high-intensity engagements when they could be picked off from squads if spread throughout a force. They follow a similar role to Devastator Squads in Codex Chapters.[1]

But while a Purgation squad initially bares strong resemblance to its Devastator counterpart, there are key doctrinal differences. In most Chapters, duty in a Devastator Squad is seen as training for a new recruit to experience the sights and sounds of battle. Not so in the Grey Knights, whose heavy firepower squads use far more complex, powerful, and rare weaponry. Thus, Purgation Squad Battle-Brothers are often veterans who have honed their experiences on the battlefield. Once his duties are established it is rare for a member of a Purgation Squad to see service elsewhere in the Chapter. A ranged battle stance, once mastered, is not easily set aside for closer-contact missions. Even Purgation Squad members who have since been promoted to Grand Master or Brother-Captain still prefer to wield the long range firepower of a Psilencer or Psycannon.[2]

Purgation Squad members also often possess the ability to hone their minds to see through the roiling energies of the Warp, perceiving their foes and guiding their shots to them regardless of what might lie in between. This astral vision allows a Purgation Squad to make seemingly impossible shots, bending the path of a projectile and even energy beams around corners, between trees, and around fortifications in mid-flight.[2]