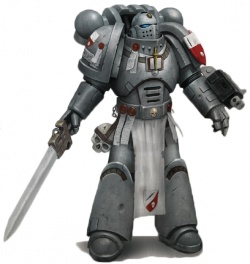 A Grey Knights Strike Squad is the most basic formation of Grey Knights Space Marines. Comprised of several Battle brothers and a Justicar, each squad member is generally armed with a Storm Bolter and Nemesis Force Weapon with others carrying a heavy weapon such as a Psycannon, Psilencer or Incinerator.[1]

Grey Knights squads are the first place new initiates arrive after they have completed their training and augmentation programme. As the chapter rarely fights together and most of the time only a single squad of Grey Knights is present anywhere, the orders of the Justicar must be followed to the letter as if he were the commander of the chapter, even if the rest of the chapter is far away. In larger, combined operations Grey Knights squads are usually used to secure an area to enable their Commander and Terminators to arrive, enabling them to reach the objective more efficiently while the basic Grey Knights hold off their foes.[1]'

Strike Squads often form the vanguard of a Grey Knights strike force. At the onset of battle, a Grey Knights commander will invariably task one or more Strike Squads with the capture of vital locations and key objectives, deploying them via fixed teleporter to ensure a swift seizure of isolated or inaccessible locations. Once in place, a Strike Squad can lay down a punishing stream of storm bolter and psycannon fire in support of the main assault. Strike Squads are, as a result of their battlefield role, used to holding out until reinforcements can be mustered or a beachhead established. Theirs is often the task of clearing the way for heavier troops or full scale landings, slipping past enemy defences when the Grand Masters prefer greater mobility and a lighter touch than the sledgehammer of a Terminator assault.[3]