Grey Slayers were warriors of the Space Wolves during the Great Crusade and Horus Heresy.

Unlike the Tactical Squads of the other Legions the Grey Slayers were compact individual warbands of Space Marines, all but autonomous in their own right. They were largely reliant and did not depend on direct commands from above, and were experienced enough to deal with many challenges on their own. Like most of the Space Wolves at this time, they specialized in seek and destroy missions. Squads were led by Huscarls.[1] 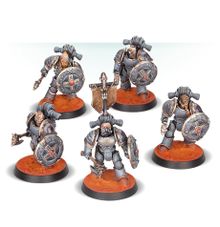