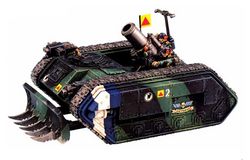 The Griffon Heavy Mortar Carrier (also known as the Griffon Armoured Weapons Carrier[7]) is an Imperial Guard artillery vehicle based on the Chimera chassis and a cousin to the Basilisk and Medusa. It is designed to provide close to medium-range artillery support.[1][2]

While the Griffon remains the most frequently-employed variant of the Chimera chassis,[2] Imperial commanders have increasingly allowed the Griffon to become something of a relic.[3] This is because of perceived drawbacks in the design, and so Griffon losses are not replaced, leading to the manufacturing rates of Griffons on many Forge Worlds to fall. Despite this trend towards eventual extinction, Griffons still remain a part of many regiments' inventories and still see combat on many worlds. During the Taros Campaign, many regiments fielded batteries of Griffons, including those of the 114th Cadian Mechanised Infantry Regiment which led the drive to relieve Hydro-processing plant 23-30.[3]

Critics of the Griffon claim that its main weapon is too small to warrant its vehicular mounting, while tying up fire control and observation assets needed by much larger pieces. For its supporters though, the Griffon is the ideal compromise between weight, firepower, mobility and ease of use.[3] Its heavy mortar is excellent against infantry and light vehicles, freeing heavier artillery for use against more appropriate targets, and can maintain a high rate of fire. The vehicle is also capable of keeping pace with rapid advances for which heavier vehicles like the Basilisk are too slow to maintain.[3] 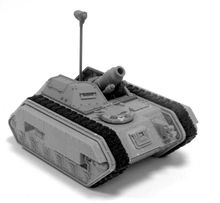 The Griffon is armed with a Heavy Mortar and hull-mounted Heavy Bolter, and comes equipped with a Searchlight and Smoke Launchers. The heavy bolter can be swapped out for a Heavy Flamer, while other upgrades include Camo Netting, Dozer Blades, Extra Armour, an enclosed crew compartment, a Hunter-Killer Missile, and a pintle-mounted Storm Bolter or Heavy Stubber.[2]