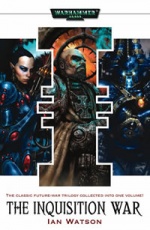 All three books, the other two being Harlequin and Chaos Child, feature the Inquisitor Jaq Draco and his retinue. Draco himself was an Inquisitor of the Ordo Malleus. 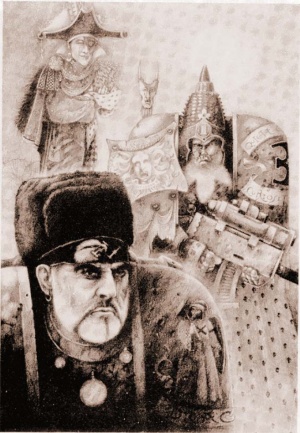 Inquisitor Jaq Draco was born on Xerxes Quintus, a planet rife with mutants and psykers. It had only recently been rediscovered and unified within the Imperium. Draco's parents were Imperial adepts sent to the planet. After they were killed he was raised as an orphan in a missionary school on the planet. Draco was discovered to be a psyker; when a Black Ship arrived he was taken and brought to Terra. He was one of the very few aboard the Black Ship judged to be psychically powerful enough to be allowed to live and go on to become an Inquisitor.

Callidus Assassin Meh'Lindi had received experimental implants allowing her to use her polymorphine-induced shapeshifting skills to reshape her body to the form of a genestealer hybrid, and this had allowed her to infiltrate Genestealer cults, which were themselves in the process of infiltrating human worlds and societies.

One of the Ordo Hydra, an extremist faction of the secret Illuminati. A psyker, becoming daemon-possessed on his home world of Hurrah; he managed to force the daemon from his body with the aid of Eldar, becoming Illuminated.

Forty thousand years in the future, the human Imperium struggles for survival against its relentless enemies. Inquisitor Jaq Draco uncovers a plot that threatens the psychic future of mankind.

In the grim darkness of the 41st millennium, the Inquisition protects mankind from its many enemies, whether foul daemons or the inscrutable, alien eldar.

Devastated by the death of a close ally, renegade Inquisitor Jaq Draco prepares to surrender his very soul to the gods of Chaos.