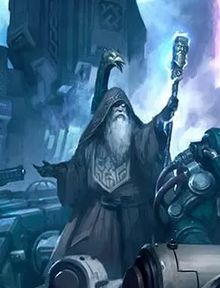 The Grimnyr are a type of Living Ancestor in the Leagues of Votann, that are blessed with psychic powers from a rare and important Cloneskein.[1]

Grimnyr's are given psychoactive Cloneskeins that allow them to exist as some of the only quasi-psychic beings of their kind. Their most important duty is that can commune with an Ancestor Core, making them universally respected in their society.[2] Their abilities allows them to use Barrier Tech to harness the raw power of the Warp in battle. The Grimnyr are also defended by two mechanical CORVs, that hover alongside them.[1]

Lord Grimnyrs are the highest of their kind, and typically a Kindred maintains one. The mechanism by which they are chosen is unknown outside of their order, yet all Kin know it requires great wisdom, guidance, and insight. Within the Votannic Council, the Lord Grimnyr is held to be the voice of the Ancestors themselves and acts as a walking conduit for both their lore and gestalt quasi-psychic might. Nor is this role purely ceremonial or advisory, for they are also formidable warriors on the battlefield wielding their Ancestral Warding Staves.[2a] 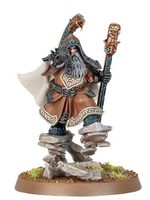 The name Grimnyr could be inspired by Grimnir, one of the names of Odin in Norse mythology. From a visual point of view the model design of the Grimnyr is also reminiscent of representations of Odin.