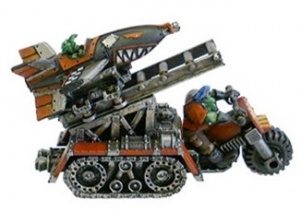 The Grot Bomb Launcha is an Ork artillery weapon which fires a guided missile piloted by a single Gretchin. The Gretchin sacrifices himself to drive the missile to its target, but whether this a punishment or reward is unknown. It is possible that Ork Mekboyz do not make the Gretchin pilots fully aware of their ultimate fate.[1a]

Grot Bomb Launchas were first encountered during the Battle of Grot Town. Imperial forces led by Captain Marcus Heilbron of the Black Crusaders were attacking an Ork enclave on the planet of Guilus II, and the defending Orks were no match for the attacking Space Marines and Imperial Guard. However under the direction of their Mekboyz the Gretchin were deployed as suicide bombers. At the height of the battle the Grot Bomb Launchas were fired at the Space Marine armoured column as it moved to attack, knocking out a Land Raider and killing Captain Heilbron himself. Since the battle, the idea has proliferated throughout Ork Kultur and other Mekboyz have copied the idea.[1a]