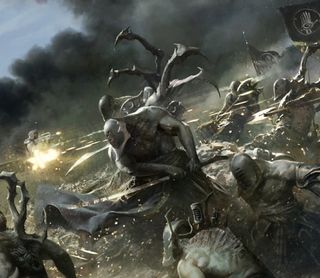 Grotesques are hulking monsters of muscle and bone created by Dark Eldar Haemonculi. One Haemonculi Coven, the Children of Bone, are known for creating exceptionally large grotesques.

The thing was horrific. Far taller and broader than a human, its ribs protruded starkly from a weeping mass of scar tissue. Its waist was wasp-thin, its chest and thighs engorged out of all proportion. Its hands were gone, replaced by claws fashioned from some glossy metal. Cylindrical vials protruded from the creature's back and stomach, bubbling with liquid as they jostled amongst chitinous spines and vanes. Needles were half-buried under the skin, and wounds pulled apart by hooks.

Unlike the Wracks, none join the ranks of the grotesques voluntarily.

Grotesques are often created from prisoners of the Haemonculi. The process of becoming a grotesque is extremely long and painful. The victim is injected with growth elixirs, macrosteroids, and muscle stimulants. The victim's bonegrowth is driven into hyperactivity by the injection of osseovirals, resulting in external spines sprouting from the victim.

Near the end of the process, perhaps many years later, the hands of the poor victim are replaced with metal claws or dripping tubes that can eject sprays of blood-ichor. At this stage of the transformation, grotesques are mostly lobotomised and so will mindlessly obey their Haemonculus master. Last of all, the victim's horrifying face is covered with a mask of black iron.

Some grotesques, perhaps the most ferocious of them, known as Aberrations, are granted by the Haemonculi some far more deadly weapons than their claws. These weapons are usually gauntlets or other integrated weaponry, as grotesques are likely not intelligent enough to truly wield weapons. These integrated weapons include Liquifier Guns, Flesh Gauntlets, and Monstrous Cleavers.[3]

In war grotesques are generally used as linebreakers. They are usually sent to frontline of an attack force, as they will kill relentlessly until commanded otherwise. Grotesques are also reported to sometimes fight amongst themselves. Likely, the various steroids and stimulants flowing through their bodies are what send them into these berserk rampages. A grotesque that has killed its fellows usually dies, though whether at the hand of its Kabalite or Wych allies, or some other reason altogether is unknown.[1]

In Codex: Dark Eldar (3rd Edition), grotesques were more similar to wracks than in their other appearances. This leads to a common confusion of canon. Grotesques should be considered as described above, however, not as they appeared in 3rd Edition.[2]