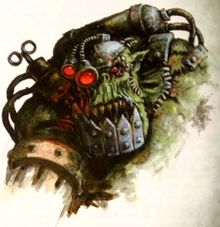 Grotsnik is, like most other Ork Painboyz, completely insane and obsessed with "serjery". He has experimented on himself so much that he has become even more resilient (and demented) than most other Orks. His implanted bionik weapons make him a fearsome killing machine in close-combat. He is more than willing to experiment on any hapless Ork who ends up on his operating table.[1]

Grotsnik began his career as a standard Painboy on the world of Urk. It was Grotsnik who performed the surgery Ghazghkull Mag Uruk Thraka when the future Warboss received a bolter round to the head, replacing a large chunk of his skull with adamantium, which led to Ghazghkull's communion with Gork and Mork and his subsequent dominance. Ghazghkull's sudden rise to power was fortuitous to Grotsnik, who found himself rising alongside the Warboss. Grotsnik seeks to turn Ghazghkull into a pet for his own ends, and he has killed the Grot Makari in the past for interfering with this plan (though the lucky Gretchin always reincarnates into a new body).[4a]

Despite the general unpopularity of Grotsnik's wanton surgery, no Ork would dare to harm him while he is under Ghazghkull's personal protection. Suddenly extremely popular, Grotsnik looked at the mob of Orks waiting outside his tent and saw another great opportunity. He convinced the richest Nobz of his tribe that they too should have need for the procedure that saved Ghazghkull. What What Grotsnik didn’t tell them was that each cranium contained a portion of high explosive, and that he had a remote trigger hidden away for each of them. The work kept rolling in, and if a Nob with a metal cranium offended Grotsnik, he had no issue detonating their upgrade later.[2a]

Eventually the Nobz figured out what was happening. Realizing they could not tackle Grotsnik face-to-face, they organised an "accident" instead. Grotsnik was called out to take a look at a faulty Deff Dread, but he was in for a nasty surprise. Grabbing Grotsnik with a pincer, the Dread held him down in the dirt and used its massive circular saw to cut open the Dok’s head. As Grotsnik’s Gretchin orderlies looked down upon their dying master, they too saw a great opportunity. They dragged the Dok all the way back to the medical tent, Grotsnik died several times that night, but was miraculously saved from death. Though alive, Grotsnik was driven quite mad and immediately detonated the craniums of every Nobz in the camp as he danced in the moonlight. Since that day his experiments have become even more bizarre, such as replacing his own limbs with those from unwilling Ork donors and replacing the brains of those seeking his services with a live Squig. It is even rumored that he is building his own composite super-Ork out of organs and body parts ‘donated’ by his customers. He operates his own personal warband of Deathskulls known as 'Da Corpse Lootas which rampage and loot with impunity. If it were not for Ghazghkull's patronage, he probably would have been killed long ago.[2a]

After Ghazghkull left the Armageddon warzone, Grotsnik followed suit and took part in Da Great Waaagh!. As Ghazghkull subjugates rival Warlords and adds their forces to his own, so Grotsnik picks over the casualties and takes the best wounded for his own nefarious purposes. Grotsnik even bullies rival Painboyz into working for him as orderlies, much to their chagrin. Those Painboyz that complain at their treatment are said to be turned into ghoulish "brain-bots".[2a]

Sometime after the formation of the Great Rift, Grotsnik led a warband of Painboyz, Cyborks, and modified Killa Kans upon a Silver Templars Chapter Strike Cruiser. He seized a number of Primaris Space Marines alive, though what he intends to do with them is best not imagined.[2]

After Ghazghkull's death at the hands of Ragnar Blackmane at the Battle of Krongar, Grotsnik and Bullets worked together to resurrect Makari once more and he revealed to the Grot that they were the same. While Makari was Ghazghkull's proud banner-waver, he was the dark companion to the Warboss who was chosen by Gork and Mork to aid him. Together, Grotsnik and Makari set about bringing back the Prophet despite their mutual hatred for each other. They recovered Ghazghkull's body and Grotsnik worked his madness, dismembering it and attaching the various parts to a gigantic suit of armor. Grotsnik utilized a power generator in orbit existing between both the Materium and Immaterium to shoot down a beam of green lightning at the spot where Ghazghkull's form lay. The experiment had a 4-in-5 chance of destroying half the planet, but it succeeded in bringing Ghazghkull back to life.[4b] 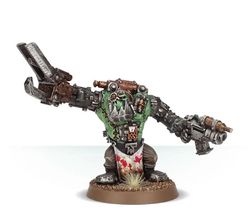