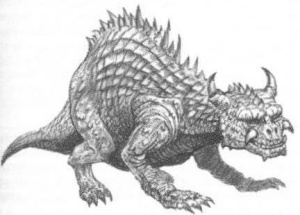 The Grox is a large, fast and aggressive reptilian animal originating from the Solomon system. When the system was absorbed into the Imperium, it was discovered the animal possessed many useful traits, such as the ability to survive in almost any environment and to thrive on even the most indigestible food. Grox meat itself is also extremely palatable and nutritious. Because of their value as livestock they have since been introduced to other worlds throughout the entire galaxy, so that the Grox is now the most common type of livestock animal throughout the Imperium.[1]

The only drawback to the Grox is their aggressive and vicious temperament. They will usually charge any creature on sight, including other Grox. They are also large, fast and dangerous beasts, about five meters long and well-muscled. They are territorial and like their privacy, so attempting to herd Grox together would easily drive them into a rage. The solution used is to lobotomise most of the stock while keeping the breeding animals sedated by drugs or suppressed with electro-prods wired directly into their small brains. Even with these precautions accidents still happen, so Grox are usually kept on agri worlds and isolated from human settlements.[1]

There are also Imperial Megafauna herd animals known as Megagrox, though, what relation they have to Grox are unknown.[3]