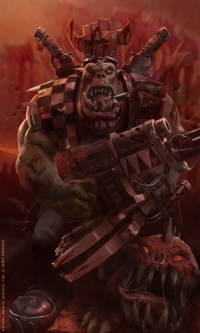 The Goff warlord Grukk is a ten-foot brute of muscle and rage. His physical presence alone makes him an intimidating sight, and underneath his scarred and pockmarked skin lies a body as hard as iron. Even when unarmed he is a terrifying sight. When he dons his monstrous power klaw, Grukk becomes practically unstoppable. It’s a well-known fact that Grukk will fly into a berserk fury whenever his temper reaches its limit, and it doesn’t take much to set him off. He once trashed an entire settlement purely because a grot attendant spilt engine oil on his breakfast.[1b]

As a younger Ork, Grukk killed Krugg the Tyrant, Warboss of his tribe, to seize power for himself. While such leadership challenges are par for the course in Ork society, the utter brutality of the battle and the spectacular fashion in which Grukk finished his old rival gave rise to the nickname ‘face-rippa’[1b] (literally defacing the face of the boss using his own power klaw, which later Grukk claimed for himself).[6a] Though the Orks of Grukk’s tribe would never admit it, they are all a bit scared of Grukk, and rightly so. No one wants to lose face in front of his mates, after all. Grukk’s power klaw is a howling, whining beast of a thing. It features a kustom buzz-saw that Grukk uses to live up his nickname as often as he can. It also magnifies his strength from merely impressive to utterly terrifying.[1b]

At the Slaughter of Black Gulch, Grukk famously tore open a malfunctioning Drop Pod to get at the Space Marines inside. He then cut all ten of the Adeptus Astartes into pieces, one by one, in a series of increasingly violent kills. It was such an ignoble fate that the commanders of the battle company authorised a revenge strike upon Grukk himself. Despite inflicting severe damage, the Space Marines were unable to complete their mission. Grukk is still alive today, albeit covered in a grotesque patchwork of thick, knotted scars. The same cannot be said of the entire Obsidian Glaives Chapter.[1b]

Though his strength is legendary, it is Grukk’s utter certainty that he cannot lose that makes him so dangerous. He makes a habit of leading every charge, no matter the odds, and publicly butchers any Ork stupid enough to question his rule. Grukk is always encrusted with the clotted blood of those he has killed. He never wipes it off, either, considering such acts as cleaning or washing to be ‘runt’s work’. His supporters claim that he has never lost a fight, not even once. It is this bloody reputation – and Grukk’s habit of painting his ships with gore – that has led to his crusade of violence being known to his followers as the Red Waaagh![1b]

This kind of renown spreads like wildfire in Orky society. Though he has never spared a thought towards the arts of leadership, Grukk has unintentionally started a Waaagh! that has blazed from one side of Sanctus Reach to the other. Ork fleets from every part of the Sanctus Reach System converge upon the front line each week, hoping to get a glimpse of the Face-rippa in action. Many of the Orks inbound on the system believe that Warlord Grukk is blessed by Gork himself. With every battle the Ork warlord wins, Waaagh! Grukk grows more powerful. There is very little chance of stopping it before it reaches critical mass and wipes out a swathe of Imperial space altogether.[1b]

During Red Waaagh! Grukk fought many great battles, in one of which - with the Space Wolves of Krom Dragongaze both commanders were left bloodied and humiliated.[6c]

Tragically, at least as far as the Orks under his command were concerned, Grukk apparently died in an 'accident' involving experimental Ork technology, probably explosive in nature. A series of smaller 'accidents' also killed a number of larger nobz, leaving Big Mek Mogrok[5], who previously commanded only a large contingent of Bad Moons[6b], in charge of the all Red Waaagh! It splintered soon afterwards, but Mogrok remains in control of the largest portion. It was eventually revealed that Grukk had survived the explosion and is now currently making his way to Mogrok to exact his revenge.[5]

Grukk makes his triumphant return, sometime after the Great Rift's creation, just as the Imperium finally defeats the forces of Chaos in the Bargheist Stars. The unsuspecting Imperials holds a grand triumph to celebrate the victory, yet at its height Grukk appears at the head of a brand new Waaagh!. His Greenskins flood the worlds of Tremendix and Aposia before the Imperials can rally their forces, and plunges the Bargheist Stars back into bloody war.[7]

In the Sanctus Reach: Evil Sun Rising novella, Grukk Facerippa is depicted as a Warboss with a buzzsaw inside his jaw, instead of his iconic buzzsaw power klaw.[8]