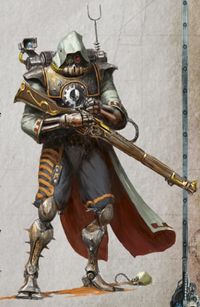 Gryphonne IV was founded during the Dark Age of Technology and was able to endure the Age of Strife. By the time the Great Crusadea rrived, Gryphonne IV had a small interstellar empire based around the Gryphonne Octad which consisted of eight mineral-rich Systems.[5]

Before its destruction Gryphonne IV was the home of the Legio Gryphonicus[1a], fearsomely disciplined Skitarii legions, and could boast the finest defences of any world in the galactic south of the Galaxy.[2] Gryphonne IV was also responsible for designing many of the Imperial Guard's vehicles, for example Chimera variant, armed with an Autocannon[4], with a twin-linked Heavy Bolters[1g] and pattern of the Leman Russ Vanquisher.[1b]

The Tyranid assault on Gryphonne IV began in 066998.M41. When the Tyranid warriors reached the planets surface, a battle of truly epic scales erupted between the alien swarms and Adeptus Mechanicus defenders from the Legio Gryphonicus and Skitarii Legions. The heavy weapons and Titans of the Mechanicum took a heavy toll on the invaders, but for each Bio-Titan that fell, one Imperial titan was lost. Despite the resolve of the Tech-priests and the toll their machines reap on the Tyranids, the Tyranid invasion gathers pace. Slowly but surely, the Imperial defenders are overwhelmed and the mighty titans of the War Gryphons brought down one by one through sheer attrition. Within days, the world is scoured.[3]

However not all of Gryphonne IV's forces were destroyed in the invasion. When it was determined the Forge World could not stop the Tyranids, a handful of Tech-Priests extracted vital blueprints, that would allow them to remake their lost Skitarii Legions, and then fought their way clear of Gryphonne IV, with a few battered cohorts. They have since vowed to continue the Omnissiah's work and scour the Imperium looking for a suitable place to build a new Forge World. Some of Legio Gryphonicus' Titans also managed to escape and later took part in the effort to defend Cadia during the Thirteenth Black Crusade. The Fortress World was destroyed in that conflict though and the final fate of the Legio's Titans is unknown.[5]

Following the planet's destruction, the forge-synod of the world's Mechanicus re-established itself on the Forge World of Tolkhan.[6]