Guardians of the Covenant

The Guardians of the Covenant are a Successor Chapter of the Dark Angels, of an unknown founding.[3]

From an unknown Founding but certainly of Dark Angels heritage, the Guardians of the Covenant have fought most of their battles in Segmentum Pacificus, focusing in particular on supporting Crusades into the Halo Stars and Veiled Region. The Guardians gained special honors for their deeds during a Lelith Incursion, saving an entire Sub-sector from the foul xenos races subjugation. The Chapter is also known for its extreme monastic nature, constantly studying the teachings of the Emperor and their Primarch, Lion El'Jonson. Reflecting this attitude, their vehicles and armour are usually covered in illuminated religious texts extracted from tomes sacred to the Adeptus Astartes.[3]

One of the 3rd Company squads - Squad Vyston - have a legendary reputation throughout the ranks of the Unforgiven: they are often referred to as tome burners or pyroclasts, for after the battle they root through the datastacks and archiviums of shocked allies, consigning volumes deemed heretical to a blazing conflagration.[4] 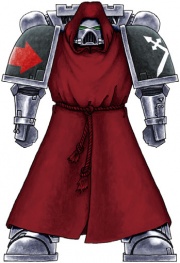 Guardians of the Covenant Firstborn