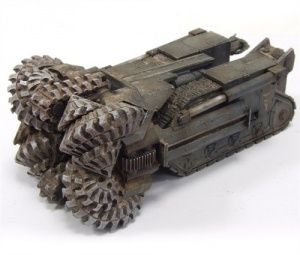 The vehicle's primary mission is to either tunnel below enemy positions or breach fortifications. Its powerful cutting-head is equipped with a melta-cutter for blasting rocks into liquid slag and also has four large diamantine-tipped powercutters to quickly smash and pound rock into rubble, which is then excavated via conveyor belt through the chassis. Typically engineers will have spent weeks or months digging a sap tunnel into position ahead of a carefully planned attack, and after being secretly moved into place the Hades is then used to quickly smash through the last few yards of rock to the target. Engineer squads emerge from the tunnel in its wake, assaulting the enemy position in a surprise assault.[1]

Although slow and cumbersome, once on the surface the Hades drill can still be an improvised weapon and is capable of cutting through just about any material. These include bunkers, defensive buildings, walls, vehicles, or even troops. However the Hades is not really a battlefield weapon but a piece of engineering equipment. In the past it has been pressed into service on the surface when attacking heavily fortified positions or fortress walls, but high rates of loss means it is a weapon of last resort and considered a poor replacement for dedicated siege platforms such as Leman Russ Demolishers.[1]

The Hades differs greatly from other specialised subterranean transport vehicles like the Adeptus Mechanicus Termite, Mole, and Hellbore, which uses a phase-field generator to dig under the earth rather than the Hades' brute-force method.[1]