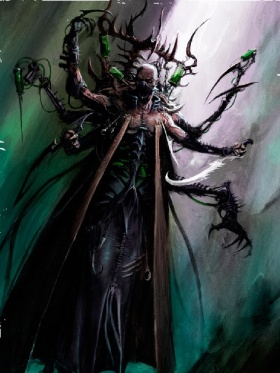 Haemonculi proclaim that the infliction of pain is one of the highest arts, if not the highest, and gleefully create choruses of screams and wails of agony whilst taking delight in every aspect of the discomfort of anyone unfortunate enough to fall under their blades. Haemonculi are also known as master manipulators of flesh, able to create horrific monstrosities and regenerate Dark Eldar slain in battle, provided enough of the body remains. Because of this, dark eldar of status will often make pacts with haemonculi, promising them fresh captives for their cruel art in exchange for medical treatment, biological enhancements, and even being brought back from the dead. Haemonculi ensure the near-immortality of Dark Eldar who can afford their services, and it is said they can be grown back to life from a single severed hand.[1]

Like most Dark Eldar groups they form into factions, known as Haemonculi Covens that base themselves across the Dark City. The Haemonculi and their covens are all secretly feared by the denizens of Commorragh despite their service, for one knows what horrors await if one crosses one of their order. Every Haemonculus considers himself akin to a god, and hence surrounds himself with a retinue of freakish acolytes that obey his every whim without hesitation. Many do not care to debase themselves by touching the ground, let alone sully themselves with physical labor. To this end, they are assisted at all times by exotic technologies and an entourage of abominations such as Wracks and Grotesques. Notorious megalomaniacs, their egos require the constant obeisance of subservient beings, most of whom they have fashioned themselves. These servants ensure the Coven’s captives are hauled about, flayed or dissected according to their master’s orders.[5]

As masters of fleshcrafting, Haemonculi heavily modify themselves. Some keep their blood, lungs and heart in a muscled hunk of meat that sprouts from their shoulders, a rich repository for stimulants and elixirs that often boasts secondary limbs of its own. Others replace their blood so that searing ichor or even acid flows through their modified veins. Their spines are elongated and extended and their vertebrae meld into whipping prehensile bone-tails that can curl around the throats of their prey. From the upper backs sprout protrusions of bony matter that often frame the Haemonculus’ head, hung with peculiar syringes and drug dispensers that channel directly into their spinal sump. Because of their skills Haemonculi are functionally immortal, and always look upon death with a vengeful glee for they know they shall soon return to exact their retribution.[2][5]

The Haemonculi are always seeking new ways to inflict horror upon the denizens of the Materium. Certain Covens, such as the Children of Bone, specialize in developing thin Grotesques to aid them upon the battlefield, while the Coven of the Ebon Sting are famed for their especially venomous Engines of Pain. It is these hideous horrors and monstrous constructs that do the majority of the killing when the Coven mounts a raid. Having lived for thousands of years, the Haemonculi look upon the planet-wrecking wars of lesser races with a snickering amusement.[2]

As every Haemonculus is old, perverse, and cunning, they carry some "dirty tricks" in their tainted sleeves. Having access to arcane wargear of the Dark Eldar, they might possess some truly dreadful array of technology such as:[4]