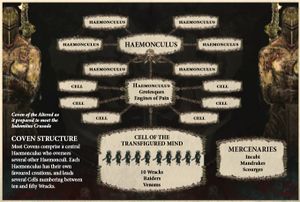 Haemonculi Covens are self-governing organizations composed of Haemonculi, the most evil creatures in Commorragh. Haemonculi Covens can be compared to Incubus sects or Wyches who from time to time co-operate with the Kabals of the Dark City.[Needs Citation]

Haemonculi Covens consist of Haemonculi, attended by their their crazy and twisted creations, such as Wracks and Grotesques.[Needs Citation]

Underneath Commorragh there are as many spires and edifices as are at the top. These are clustered into confusing, anarchic profusion, many hollowed out by controlled acts of destruction until they form up cavern-like lairs. The Underworld of the Dark City is an exceptionally dangerous place (even by the standards of Commorragh, which as a whole is one of the most dangerous places in the galaxy). Inside the Underworld, Haemonculi of like-mind traditionally gather together into covens[1a] for mutual benefit and protection to avoid excessive coercion or assassination, for the rivalry between the covens extends back for millennia. The disputes between covens tend to be more about slow-paced scheming, rather than outright open conflict.[3] Each of these covens occupies a vast demesne of cells and laboratories, and it is in here — deep beneath the Dark City — where diabolical figures of Haemonculi meld flesh and create their pieces of art. Their dungeon-strongholds take many forms, including labyrinths of mirrors, spiral-edged pits with narrow, twisting walkways or entire towers of living flesh.[1a] The covens demand absolute fealty from their members and always mask their activities in utmost secrecy.[3]

One of the most important roles of the Covens in Commorragh is artificially growing Dark Eldar. Fertilised eggs are implanted to amniotic tubes that honeycomb the breeding-walls of their laboratories. With a disgusting, insectile technology that is many millennia old, the growth of the embryos is hyperaccelerated. The newborn are then attended to by Wracks. Dark Eldar born this way are much more common, which has resulted in an increase of social status for conventionally born "Trueborn" who consider themselves inherently superior over "half-born" grown in tubes.[1b]

The science of the Covens has also made its mark in the Dark Eldar society not only in being able to create new life, but also by denying death. Haemonculi have the ability to regrow a corpse back to its former life, provided that they are brought to them no later than a day from their death. Kabals often make pacts with the Haemonculi to regenerate their dead back to life after a realspace raid.[1b] The act of bringing life back happens through the use of pain on another living being. The corpse of the Dark Eldar to be revived is installed in semi-cocooned state inside a regeneration pod arrayed above torture tables and other instruments of the laboratories. The patient will slowly feast on the cacophony of shrieks from a victim below, first growing back the skeleton, then muscle and sinew and lastly the alabaster skin which the Dark Eldar are known for. During a war, it is common for every pod of a dungeon to be filled with red-raw bodies that shiver and rattle with every new scream.[1b]

Several Covens specialize in Engines of Pain. These include The Everspiral, The Ebon Sting, The Altered, and The Prophets of Flesh.[2]

The hierarchy in Haemonculi Covens is not known, although it is highly possible that there is one Master Haemonculus, or Haemonculus Ancient, in each Coven.[Needs Citation]

Haemonculi Covens field a variety of horrifying but effective soldiers and weapons in battle, including: