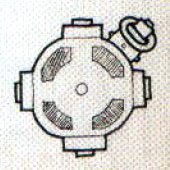 Hallucinogen grenades are used as psychological weapons. They release a cloud of invisible gas which has strange and unpredictable effects on the minds of those inhaling it. These effects usually have the result of taking the victim out of combat or making him turn against his allies; effects range from turning victims into passive zombies or idiots, to producing delusions, paranoia and hallucination.[3] Only those with armour which seals them from the local environment are unaffected by hallucinogenic gas.[1] Though the effect may be much strong on the victim, it is usually short-lived and ceased soon.[3]