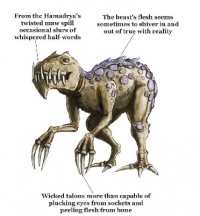 The Hamadrya is a Chaos-spawned creature that acts as the familiar to Lufgt Huron, the leader of the Red Corsairs.[1]

The creature's exact nature and origin are unclear. It supposedly appeared after the fall of Badab, where Huron was greviously wounded. Many of the Corsairs whispered that, while the Apothecaries laboured to repair his broken body, his soul wandered free, eventually making a pact with the Ruinous Powers that would enable him to survive. The Hamadrya appeared at his side then, almost as insubstantial as a wisp of vapour. As Huron recovered and his power grew, the Hamadrya likewise grew and took on a more cohesive shape. Its exact appearance is unknown; sometimes it is invisible, and when it chooses to appear it can be avian, reptilian, or mammalian in shape.[2]

Similarly, the gifts it bestows on Blackheart are uncertain and often changeable. At times it endows him with the Warptime ability wielded by Chaos Sorcerers[1]. At others, it appears to shield him from psychic attack or detection, similar to a Null Rod.[2] Rumors are that it also allows Huron to read others' thoughts, and he has thus evaded assassination a hundred times over.[3]

The Hamadrya's abilities were once limited to the boundaries of the Maelstrom, since it needed warp energy to sustain itself. This imposed a limitation on Huron's ability to venture abroad, so he consulted his Librarians, and eventually succeeded in binding the soul of a powerful Sorcerer in a vessel, which would allow Huron to continue to enjoy "the blessing of the Four" outside the Maelstrom.[2]